Approaches to Multi-Objective Optimization and Assessment of Green Infrastructure and Their Multi-Functional Effectiveness: A Review
Previous Article in Journal

Dongting Lake is located at the downstream of Three Gorges Dam (TGD) and the hydrological drought is intensified after the impoundment of TGD as the dry period has been extended from 123 days/year before the operation of TGD (1981–2002) to 141 days/year (2003–2016) on average. Particularly, the Dongting Lake’s water shortage becomes very severe. To solve the problem caused by upstream dams, an innovative flood control scheme (IFCS) was introduced, and its feasibility of application in Dongting Lake is studied using the hydrodynamic module of Mike 21. The results show the IFCS can effectively convert the peak discharge of floodwater in wet seasons into water resources in dry seasons as the IFCS could significantly increase the usable water storage of the lake. For example, the usable water storage could increase to 2.85 billion m3 and 1.81 billion m3 in the extreme drought year of 2006 and 2011, respectively. The average increment of the water level would be about 0.4 m, 0.6 m, and 0.5 m in the West Dongting Lake (WDL), South Dongting Lake (SDL), and the East Dongting Lake (EDL), respectively, if the water stored in the inner lake was discharged uniformly in 30 days (27 November to 27 December 2006) with the application of IFCS. This study may provide an innovative method to alleviate the water shortage problem in Dongting Lake and other similar lakes. View Full-Text
Keywords: hydrological drought; water shortage crisis; Dongting Lake; water supply; dry season hydrological drought; water shortage crisis; Dongting Lake; water supply; dry season
►▼ Show Figures 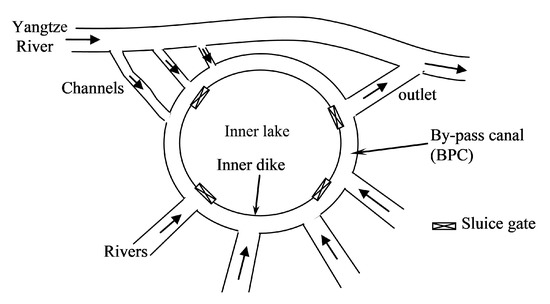