Behavior of PBTC, HEDP, and Aminophosphonates in the Process of Wastewater Treatment
Next Article in Special Issue

Saline-sodic soils are a major impediment for agricultural production in semi-arid regions. Salinity and sodicity drastically reduce agricultural crop yields, damage farm equipment, jeopardize food security, and render soils unusable for agriculture. However, many farmers in developing semi-arid regions cannot afford expensive amendments to reclaim saline-sodic soils. Furthermore, existing research does not cover soil types (e.g., Luvisols and Lixisols) that are found in many semi-arid regions of South America. Therefore, we used percolation columns to evaluate the effect of inexpensive chemical and organic amendments (gypsum and cow manure) on the reclamation of saline-sodic soils in the northeast of Brazil. Soil samples from two layers (0–20 cm and 20–40 cm in depth) were collected and placed in percolation columns. Then, we applied gypsum into the columns, with and without cow manure. The experiment followed a complete randomized design with three replications. The chemical amendment treatments included a control and four combinations of gypsum and cow manure. Percolation columns were subjected to a constant flood layer of 55 mm. We evaluated the effectiveness of sodic soil reclamation treatments via changes in soil hydraulic conductivity, chemical composition (cations and anions), electrical conductivity of the saturated soil-paste extract, pH, and the exchangeable sodium percentage. These results suggest that the combined use of gypsum and cow manure is better to reduce soil sodicity, improve soil chemical properties, and increase water infiltration than gypsum alone. Cow manure at 40 ton ha−1 was better than at 80 ton ha−1 to reduce the sodium adsorption ratio. View Full-Text
Keywords: salinization; gypsum; manure; sodicity; tropical soils salinization; gypsum; manure; sodicity; tropical soils
►▼ Show Figures 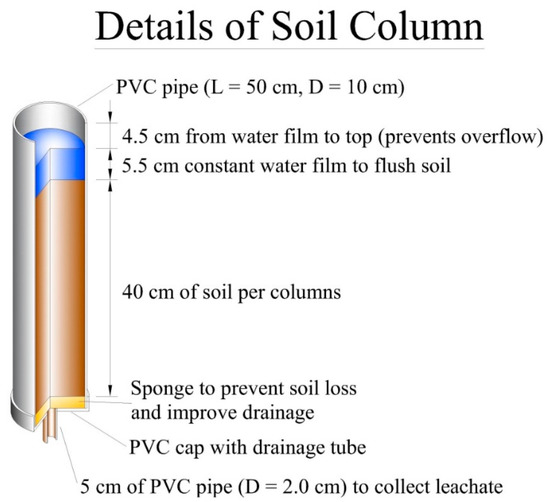