Challenges of Commercial Aquaponics in Europe: Beyond the Hype

In recent years, aquaponics has been receiving increased interest globally as a commercial food production technology and aquaponics start-up companies have been formed in most European countries. Between 2014 and 2018, the European-funded COST Action FA1305 “The EU Aquaponics Hub-Realising Sustainable Integrated Fish and Vegetable Production for the EU” created a strong network of researchers and entrepreneurs. However, surveys show that the aquaponic production in Europe is still very limited, and very few companies are economically viable. In order to obtain insights into the barriers to early development of commercial aquaponics, two surveys were carried out—one in Europe, which included France, and one in France alone, with a different protocol. Henceforth, for simplicity, the former will be referred to as Europe and the latter as France. The results reveal that the development of commercial aquaponics has hit the level of “disillusionment”, caused by numerous challenges facing commercial food production. As the understanding of the processes involved in aquaponics is increasing, it will be very interesting to follow the developments in the field over the coming years in order to ascertain whether aquaponics will follow the phases outlined by the “Gartner’s Hype Cycle” and thus proceed to become an established technology, or whether it will remain an “one hit wonder” and disappear in the “Trough of Disillusionment”. View Full-Text
Keywords: aquaponics; innovation adoption; Gartner’s Hype Cycle aquaponics; innovation adoption; Gartner’s Hype Cycle
►▼ Show Figures 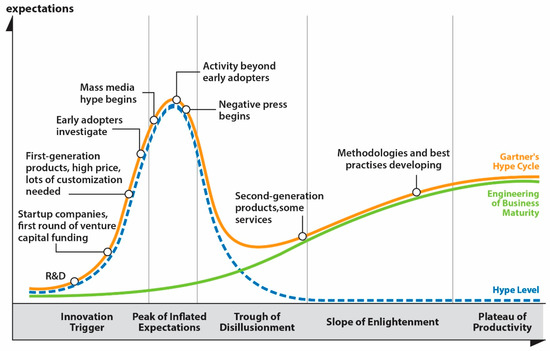