Climate change has led to the formation of numerous high-altitude lakes of glacial origin in the Himalaya. Safed Lake is one of the largest glacial lakes, located at an elevation 4882 m a.s.l. in the state of Uttarakhand, central Himalaya, India. A temporal analysis of the lake surface using satellite imagery shows that the lake has grown more than double its size from 0.10 km2 to 0.23 km2 over the past 50 years. In this study, we performed a hazard assessment of the lake using 1D and 2D hydrodynamic modeling. We identified the potential glacial lake outburst flood (GLOF) triggering factors and evaluated the impact of a moraine breach event of the lake on the nearest village located 16.2 km downstream of the lake. A series of dynamic simulations were performed for different scenario-models based on varied breach depths, breach widths and time of moraine failure. In a worst-case GLOF scenario where breach depth reached up to 60 m, hydrodynamic routing of the breach hydrograph along the given channel revealed inundation depth up to 5 m and flow velocities up to 3.2 m s−1 at Milam village. Considering the flat geometry of the frontal moraine, hazard assessment of the lake was performed by for different breach incision depths (30 and 15 m). In addition, the study incorporated a series of hydrodynamic routing to understand the sensitivity of GLOF to different model input parameters and terrain conditions. The sensitivity of the initial GLOF hydrograph to breach formation time (Tf) was evaluated by considering different hypothetical breach scenarios with a varied time of failure. Increases of 11.5% and 22% in the peak flooding were recorded when the moraine failure time was decreased by 15 and 30 min respectively. The two-dimensional sensitivity revealed flow velocity (m s−1) to be more sensitive to change in Manning’s N when compared to the inundation depth (m). Changes of 10.7% and 0.5% in the mean flow velocity (in m s−1) and flow depth (in m) were recorded when dN was 0.01. The flow velocity was more sensitive to the slope and the top-width of the channel when compared to the inundation depths. A regression of flow velocity versus slope gives a correlation coefficient of 0.76. GLOF flow hydraulics are sensitive to changes in terrain elevation, where flow depth and velocity vary in a similar manner. View Full-Text
Keywords: GLOF; HEC-RAS; hazard assessment; hydrodynamic modeling; Indian Himalaya; Uttarakhand GLOF; HEC-RAS; hazard assessment; hydrodynamic modeling; Indian Himalaya; Uttarakhand
►▼ Show Figures 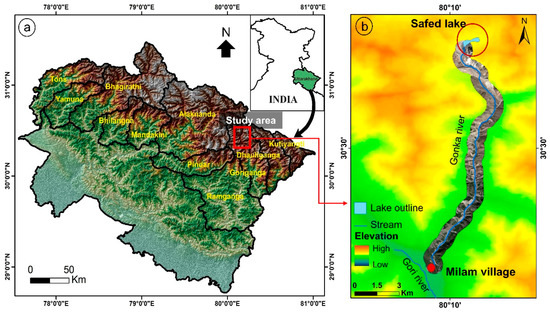