Water deficit is considered one of the most limiting factors of the common bean. Understanding the adaptation mechanisms of the crop to this stress is fundamental for the development of drought-tolerant cultivars. In this sense, the objective of this study was to analyze the influence of water deficit on physiological and morphoagronomic traits of common bean genotypes with contrasting drought tolerance, aiming to identify mechanisms associated with tolerance to water deficit. The experiment was carried out in a greenhouse, arranged in a randomized complete block 4 × 2 factorial design, consisting of four common bean genotypes under two water regimes (with and without water stress), with six replications. The morphoagronomic and physiological traits of four cultivars, two drought-tolerant (IAPAR 81 and BAT 477) and two drought-sensitive (IAC Tybatã and BRS Pontal), were measured for 0, 4, 8, and 12 days, under water deficit, initiated in the phenological stage R5. Water-deficit induced physiological changes in the plants, altering the evaluated morphoagronomic traits. The drought tolerance of cultivar BAT 477 is not only a direct result of the low influence of water deficit on its yield components, but also a consequence of the participation of multiple adaptive physiological mechanisms, such as higher intrinsic water use efficiency, net photosynthesis rate, transpiration, carboxylation efficiency, stomatal conductance, and intracellular concentration of CO2 under water deficit conditions. On the other hand, cultivar IAPAR 81 can be considered drought-tolerant for short water-deficit periods only, since after the eighth day of water deficit, the physiological activities decline drastically. View Full-Text
Keywords: Phaseolus vulgaris L.; abiotic stress; plant breeding Phaseolus vulgaris L.; abiotic stress; plant breeding
►▼ Show Figures 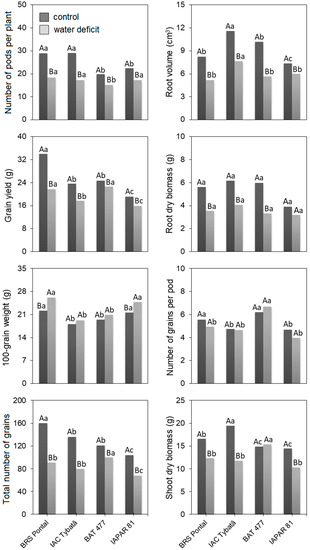