Forcing the Penman-Montheith Formulation with Humidity, Radiation, and Wind Speed Taken from Reanalyses, for Hydrologic Modeling

The Penman-Monteith reference evapotranspiration (ET0) formulation was forced with humidity, radiation, and wind speed (HRW) fields simulated by four reanalyses in order to simulate hydrologic processes over six mid-sized nivo-pluvial watersheds in southern Quebec, Canada. The resulting simulated hydrologic response is comparable to an empirical ET0 formulation based exclusively on air temperature. However, Penman-Montheith provides a sounder representation of the existing relations between evapotranspiration fluctuations and climate drivers. Correcting HRW fields significantly improves the hydrologic bias over the pluvial period (June to November). The latter did not translate into an increase of the hydrologic performance according to the Kling-Gupta Efficiency (KGE) metric. The suggested approach allows for the implementation of physically-based ET0 formulations where HRW observations are insufficient for the calibration and validation of hydrologic models and a potential reinforcement of the confidence affecting the projection of low flow regimes and water availability. View Full-Text
Keywords: hydrology; modeling; evapotranspiration; reanalysis; Penman-Monteith; humidity; radiation; wind speed hydrology; modeling; evapotranspiration; reanalysis; Penman-Monteith; humidity; radiation; wind speed
►▼ Show Figures 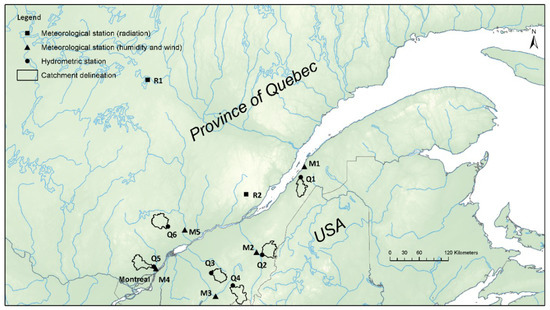