Response of Cladocera Fauna to Heavy Metal Pollution, Based on Sediments from Subsidence Ponds Downstream of a Mine Discharge (S. Poland)

Long-Term Changes in the Zooplankton Community of Lake Maggiore in Response to Multiple Stressors: A Functional Principal Components Analysis

We describe the long-term (1981–2008) dynamics of several physico-chemical and biological variables and how their changes may have influenced zooplankton structure in Lake Maggiore (Italy). Data was available for the 1981–1992 and 1995–2008 periods. Standardized time-series for temperature and total phosphorus (TP), chlorophyll-a, phytoplankton density (cel m−3), and cell size (µm3), as well as zooplankton structure (Copepoda, Cladocera, and Rotifera density, ind m−3) were smoothed using penalized B-splines and analyzed using Functional Principal Components (FPCs) to assess their dominant modes of variation. The first four FPCs explained 55% of 1981–1992 and 65% of 1995–2008 overall variation. Results showed that temperature fluctuated during the study period, particularly during 1988–1992 with a general tendency to increase. TP showed a declining trend with some reversions in the pattern observed in the years 1992, 1999, and 2000. Phytoplankton estimators and chlorophyll-a concentration showed a variable trend along the study period. Zooplankton groups also had a variable trend along the study period with a general increase in density of large carnivorous (mainly Bythotrephes longimanus) and a decrease of large herbivorous (mainly Daphnia), and a similar increase in the ratio of raptorial to microphagous rotifers. Our results suggest that the lake experienced a strong trophic change associated with oligotrophication, followed by pronounced climate-induced changes during the latter period. TP concentration was strongly associated with changes in abundance of some zooplankton taxa. View Full-Text
Keywords: B-Splines smoothing; Functional Data Analysis; limnology; monitoring ecological dynamics; oligotrophication; zooplankton; phytoplankton B-Splines smoothing; Functional Data Analysis; limnology; monitoring ecological dynamics; oligotrophication; zooplankton; phytoplankton
►▼ Show Figures 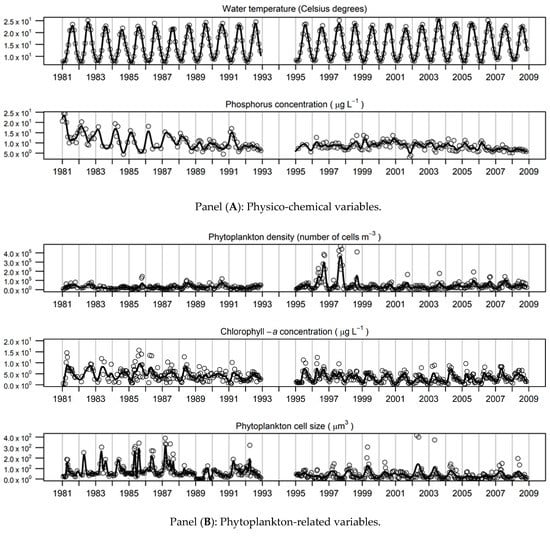