Stability of Rubble Mound Breakwaters—A Study of the Notional Permeability Factor, Based on Physical Model Tests
Next Article in Special Issue

In Western Bahia, one of the most active agricultural frontiers of the world, cropland area and irrigated area are increasing at fast rates, and water conflicts have been happening at least since 2010. This study makes a hydroclimatic analysis of the water resources in Western Bahia, from both supply and demand viewpoints. Time series of precipitation for the period 1980–2015 and river discharge for the period 1978–2015 are analyzed, indicating a significant reduction of up to 12% in rainfall since the 1980s, and a reduction in river discharge in all stations studied, in both the rainy season and the dry season. Combined with that, irrigated area has increased over 150-fold in 30 years, and in the most irrigated regions, has increased by 90% in the last eight years only. Seven regions in Western Bahia have been identified where the potential for water use conflicts is critical. Moreover, the combination of reduced availability and increased demand of water resources indicates that, if current trends are maintained, conflicts over water may become more frequent in the next years or decades. A short-term alternative to avoid such conflicts is to largely avoid irrigation during the months with low discharge. However, a monitoring system in which the availability and demand of water resources for irrigation are actually measured and monitored, is the safest path to provide water security to this region. View Full-Text
Keywords: climate change; MATOPIBA agricultural frontier; water security; hydroclimatic analysis; water conflicts climate change; MATOPIBA agricultural frontier; water security; hydroclimatic analysis; water conflicts
►▼ Show Figures 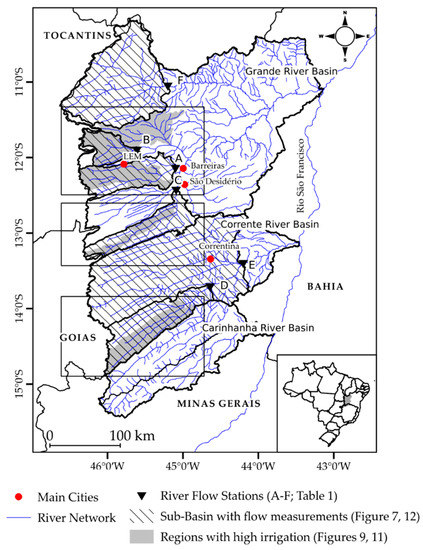