A prediction–correction solver is presented here for rapid simulation of free-surface flows in dendritic and looped river networks. Rather than solving a large global algebraic system over the entire domain of river networks, the model solves subsystems for subdomains of branches in two steps: prediction and correction. With the help of the prediction–correction method (PCM), the partial linearization technique, the semi-implicit method, and the Eulerian–Lagrangian method (ELM), the model only needs to solve tridiagonal linear systems for branches and is free of any iteration. The new model was tested using a hypothetical looped river network with regular cross sections, the Three Gorges Reservoir (TGR) dendritic river network, and the Jing-south looped river system (with seasonally flooding branches). In the first test, a time-step sensitivity study was conducted and the model was revealed to produce accurate simulations at large time steps when the condition for application of the PCM to river networks was satisfied. In the TGR test, the PCM model provided almost the same histories of water levels and discharges as those simulated by the HEC-RAS model. In the Jing-south test, the mean absolute error in simulated water levels was 0.07–0.24 m, and the relative error in simulated cross-section water flux was 0.5–4.9% compared with field data; the conservation error was generally 2 × 10−4 to 3 × 10−4. The PCM model was revealed to be 2–4 times as fast as a reported model, which solves local nonlinear subsystems using two-layer iterations, and 1.2–1.4 times as fast as the HEC-RAS. Using a time step of 1200 s, it took the sequential code 26.8 and 23.1 s to complete a simulation of a one-year unsteady flow process, respectively, in the TGR river networks (with 588 cells) and the Jing-south river system (with 662 cells). View Full-Text
Keywords: river networks; free-surface flow; prediction–correction method; Eulerian–Lagrangian method; one-dimensional; numerical model river networks; free-surface flow; prediction–correction method; Eulerian–Lagrangian method; one-dimensional; numerical model
►▼ Show Figures 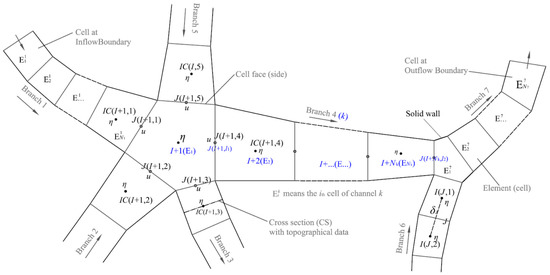