Dynamics of Cyanobacteria and Related Environmental Drivers in Freshwater Bodies Affected by Mitten Crab Culturing: A Study of Lake Guchenghu, China
Next Article in Special Issue

The Role of Debris Cover in Catchment Runoff: A Case Study of the Hailuogou Catchment, South-Eastern Tibetan Plateau
Previous Article in Journal

GLOF Risk Assessment Model in the Himalayas: A Case Study of a Hydropower Project in the Upper Arun River

Glacier velocity is one of the most important parameters to understand glacier dynamics. The Severnaya Zemlya archipelago is host to many glaciers of which four major ice caps encompassing these glaciers are studied, namely, Academy of Sciences, Rusanov, Karpinsky, and University. In this study, we adopted the differential interferometric synthetic aperture radar (DInSAR) method utilizing ALOS-2/PALSAR-2 datasets, with a temporal resolution of 14 days. The observed maximum velocity for one of the marine-terminating glaciers in the Academy of Sciences Ice Cap was 72.24 cm/day (≈263 m/a). For the same glacier, an increment of 3.75 times the flow rate was observed in 23 years, compared to a previous study. This has been attributed to deformation in the bed topography of the glacier. Glaciers in other ice caps showed a comparatively lower surface velocity, ranging from 7.43 to 32.12 cm/day. For estimating the error value in velocity, we selected three ice-free regions and calculated the average value of their observed movement rates by considering the fact that there is zero movement for ice-free areas. The average value observed for the ice-free area was 0.09 cm/day, and we added this value in our uncertainty analysis. Further, it was observed that marine-terminating glaciers have a higher velocity than land-terminating glaciers. Such important observations were identified in this research, which are expected to facilitate future glacier velocity studies. View Full-Text
Keywords: glacier movement; differential SAR interferometry; marine-terminating glacier glacier movement; differential SAR interferometry; marine-terminating glacier
►▼ Show Figures 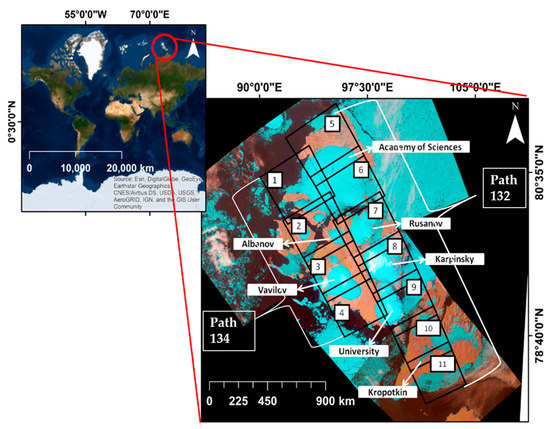