Future Changes in Flood Hazards across Canada under a Changing Climate

The continuous simulation approach to assessing the impact of climate change on future flood hazards consists of a chain of consecutive actions, starting from the choice of the global climate model (GCM) driven by an assumed CO2 emission scenario, through the downscaling of climatic forcing to a catchment scale, an estimation of flow using a hydrological model, and subsequent derivation of flood hazard maps with the help of a flow routing model. The procedure has been applied to the Biala Tarnowska catchment, Southern Poland. Future climate projections of rainfall and temperature are used as inputs to the precipitation-runoff model simulating flow in part of the catchment upstream of a modeled river reach. An application of a lumped-parameter emulator instead of a distributed flow routing model, MIKE11, substantially lowers the required computation times. A comparison of maximum inundation maps derived using both the flow routing model, MIKE11, and its lump-parameter emulator shows very small differences, which supports the feasibility of the approach. The relationship derived between maximum annual inundation areas and the upstream flow of the study can be used to assess the floodplain extent response to future climate changes. The analysis shows the large influence of the one-grid-storm error in climate projections on the return period of annual maximum inundation areas and their uncertainty bounds. View Full-Text
Keywords: flood inundation maps; climate change; EURO-CORDEX projections; continuous simulations flood inundation maps; climate change; EURO-CORDEX projections; continuous simulations
►▼ Show Figures 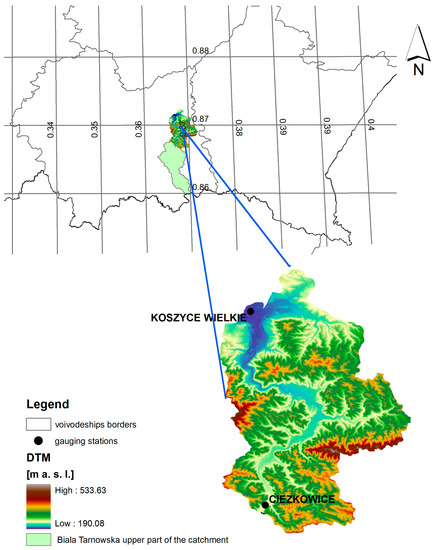