The Impact of Climate on Hydrological Extremes

Increasing impervious land cover has great impacts on groundwater regimes in urbanized areas. Low impact development (LID) is generally regarded as a sustainable solution for groundwater conservation. However, the effects of LID on the spatial-temporal distribution of groundwater are not yet fully understood. In this case study, a coupled Storm Water Management Model (SWMM) and Finite Element Subsurface FLOW system (FEFLOW) model was used to simulate surface and groundwater flow in an urbanized area in Shenzhen, China. After verification, the model was used to analyze the spatial-seasonal variations of groundwater head and hydrological processes under different LID scenarios. The results indicate that if the runoff from 7.5% and 15% of impervious area is treated by LID facilities, the annual surface runoff decreases by 5% and 9%, respectively, and the spatial average groundwater head relative to sea level pressure increases by 0.9 m and 1.7 m in the study area, respectively. The rise in groundwater head generally decreases from the recharge zones to the discharge zones surrounded by the streams and coastal waters. However, the groundwater head change is determined not only by the location in the catchment, but also by the hydraulic conductivity of underlying aquifer and LID infiltration intensity. Moreover, LID significantly enhances groundwater recharge and aquifer storage in the wet seasons; in turn it increases aquifer release and groundwater discharge in the dry seasons. However, LID has the potential to increase the risk of groundwater flooding during wet seasons in areas with poor aquifer drainage capacity and shallow groundwater depth. The findings from this study provide the basis for further assessing the benefit and risk of LID infiltration for groundwater supplementation in the urbanized areas. View Full-Text
Keywords: LID; infiltration; recharge; hydrological balance LID; infiltration; recharge; hydrological balance
►▼ Show Figures 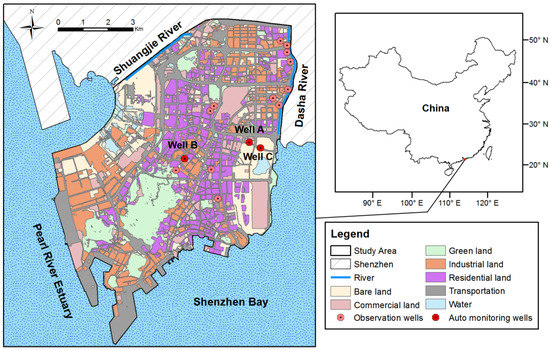