An Investigation on Performance and Structure of Ecological Revetment in a Sub-Tropical Area: A Case Study on Cuatien River, Vinh City, Vietnam

In this study, future probable maximum precipitations (PMPs) based on future meteorological variables produced from three regional climate models (RCMs) of 50-km spatial resolution provided by Coordinated Regional Climate Downscaling Experiment (CORDEX) are projected. In order to estimate future PMPs, the hydro-meteorological method is applied. The key future meteorological variable used to analyze the rate of change of future PMPs is the dew-point temperature. Future 12-h persistence 100-year return period extreme dew-point temperatures obtained from future daily dew-point temperature time series by using the scale-invariance method are applied to estimate future PMPs. As a result of estimating future PMPs using several RCMs and representative concentration pathways (RCPs) scenarios, the spatial distribution of future PMPs is expected to be similar to that of the present, but PMPs tend to increase in the future. In addition, it can be seen that the difference in PMPs estimated from various RCMs and RCP scenarios is getting bigger in the future. Especially after 2070, the difference has increased even more. In the short term, it is proposed to establish climate change adaptation policies with an 18% increase in PMPs, which is the ensemble average in the future year 2050. View Full-Text
Keywords: climate change; ensemble; probable maximum precipitation; RCM; scale-invariance climate change; ensemble; probable maximum precipitation; RCM; scale-invariance
►▼ Show Figures 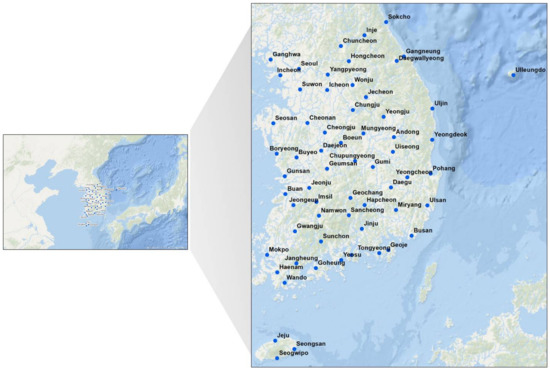