River systems are crucial for the Earth system. However, they are profoundly impacted by human activities, especially land use change. To reveal the impact of land use change on river systems, river system data and land use data in Suzhou City from the 1960s to 2010s were analyzed through grid river density on a 3 km × 3 km scale. The spatial-temporal variation was very different for different river orders. The lower the river order, the larger was the variation in the accumulated length (including both an increase and a decrease). The river systems were modified to meet the needs of human development in different social development stages. During the period of agricultural modification, undeveloped land was reclaimed to increase the amount of arable land available, but when the proportion of cultivated land exceeded a threshold level, higher order rivers were invaded, cut off and even buried, which forced a part of the higher order rivers to transform into narrower rivers. During the period of urbanization, higher order rivers were usually dredged, reconstructed and protected to improve the abilities of storage and discharge, and lower order rivers were buried after 40% of the land proportion had been built up. These results provide a reliable foundation on which to formulate policies and manage river systems. View Full-Text
Keywords: river systems; land use change; spatial-temporal change; river network plain river systems; land use change; spatial-temporal change; river network plain
►▼ Show Figures 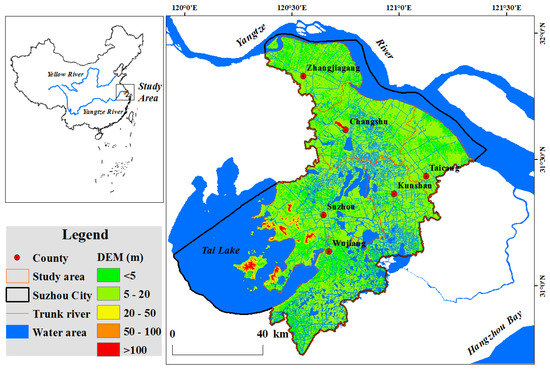