Storm water harvesting and storage has been employed for nearly a hundred years, and using storm water to recharge aquifers is one of the most important ways to relieve water scarcity in arid and semi-arid regions. However, it cannot be widely adopted because of clogging problems. The risk of chemical clogging is mostly associated with iron oxyhydroxide precipitation; anhydrous ferric oxide (HFO) clogging remains a problem in many wellfields. This paper investigates Fe(III) clogging levels at three flow velocities (Darcy velocities, 0.46, 1.62 and 4.55 m/d). The results indicate that clogging increases with flow velocity, and is mostly affected by the first 0–3 cm of the column. The highest water velocity caused full clogging in 35 h, whereas the lowest took 53 h to reach an stable 60% reduction in hydraulic conductivity. For the high flow velocity, over 90% of the HFO was deposited in the 0–1 cm section. In contrast, the lowest flow velocity deposited only 75% in this section. Fe(III) deposition was used as an approximation for Fe(OH)3. High flow velocity may promote Fe(OH)3 flocculent precipitate, thus increasing Fe(III) deposition. The main mechanism for a porous matrix interception of Fe(III) colloidal particles was surface filtration. Thus, the effects of deposition, clogging phenomena, and physicochemical mechanisms, are more significant at higher velocities. View Full-Text
Keywords: managed aquifer recharge; clogging; storm water managed aquifer recharge; clogging; storm water
►▼ Show Figures 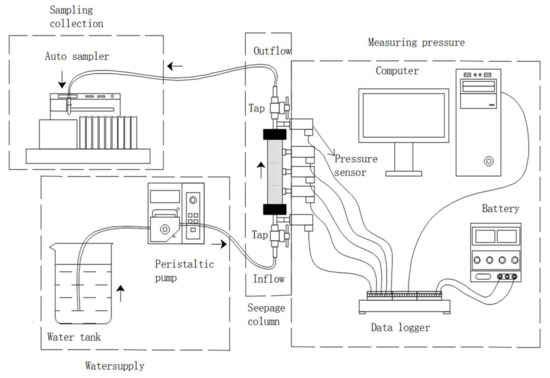