Multi-Stakeholder Development of a Serious Game to Explore the Water-Energy-Food-Land-Climate Nexus: The SIM4NEXUS Approach

The Total Risk Analysis of Large Dams under Flood Hazards

Dams, considered to be “structures of public utility,” play an essential role in controlling and harvesting benefits from floods and always pose potential risks to human life and property on their downstream side in the event of flood [1,2,3]. According to the International Commission on Large Dams (ICOLD), overtopping causes about 35% of all earth dam failures, seepage, and piping, while other causes make up the rest, and floods are the driving forces in dam overtopping [4]. Dam floods are highly vulnerable and particularly devastating in high mountain areas, since a lack of basic data limits our understanding of the complex hydrology of mountain areas generally [5,6]. Although particularly complex, dam flood risk evaluation can provide a rational basis for risk management, the importance of which has increasingly been recognized by both academic researchers and managers [7]. It is usually performed with applying statistical methods or sophisticated mathematical models; however, for situations in which data is lacking, improvements or replacements are necessary to provide reliable results faster.
Many efforts have also been made to analyze the flood risk of dam structures. Various studies have proposed procedures to assess the total risk of dams. There are two main approaches to quantitatively analyzing dam overtopping caused by flood: probabilistic risk analysis and indicator-based risk analysis. While the probability estimation relies on large samples of historical data, the indicator-based method solves the non-linear problems inherent to risk assessment in a complex manner. ICOLD’s and Bureau’s methods can deal with these problems [8,9,10,11,12,13,14,15]. The wildly known method recommended by ICOLD quickly rates total risk and evaluates the seismic hazard of a dam site and the risk rating of the structure separately [8]. The method was developed by Bureau, who combined these two factors to define the total risk factor (TRF) and established the type of dam as an important parameter impacting the TRF [9,16]. The method was subsequently applied to dams in South Carolina and neighboring states [10], and to the Euphrates Basin in Turkey [11]. According to Bureau’s method, the total risk rating is based on the capacity of the reservoir, the height of the dam, the evacuation requirements, and the potential downstream damages [12].
In the study, we propose a method for flood risk analysis of large dams by extending ICOLD’s and Bureau’s TRF concepts, which can be used to rate the total risk of each evaluated dam quickly by evaluating the hazard of the dam site, the risk rating of flood vulnerability, and the downstream potential risk and by assigning the risk classes of each dam in terms of TRFs.

The Dadu River is located in the Sichuan province, Southwestern China. It is a tributary of the Min River, a main tributary of the Yangtze River. With a total area of 77.4 × 103 km2, the Dadu River Basin maintains the quantity and quality of the upstream area of the Yangtze River and supplies the water to the west line of the South-to-North Water Diversion Project [28]. The Dadu River has been heavily developed, primarily for hydroelectric power purposes. A total of 22 cascade reservoirs, which are a typical mixed cascade reservoir system, have been designed to exploit the energy and flood control potential of the basin (Figure 2). In this study, six cascade reservoirs of the system—Busigou (BSG), Shuangjiangkou (SJK), Luding (LD), Dagangshan (DGS), Longtoushi (LTS), and Pubugou (PBG)—from upstream to downstream were selected and evaluated based on the proposed method. The characteristic parameter values and the corresponding risk factor weights of the six reservoirs are given in Table 8. These parameter values were obtained from the related yearbooks and investigation reports.
According to data analysis, the precipitation and flood characteristics in the upper and lower reaches of LD are obviously different, and heavy rainfall events do not occur simultaneously in the upper or lower reaches of LD. Furthermore, the zone of intense rainfall within a storm system is commonly concentrated within a smaller portion of the drainage basin, and the risk situations of each reservoir under different rainfall scenarios cannot be considered comprehensively if only the local rainfall data of each reservoir is applied to derive the flood hydrograph. Therefore, the TRF of each dam was evaluated for different rainfall scenarios. Based on the physiographic characteristics of the basin and the hydrologic climate feature, the heavy rainfall patterns in the Dadu River Basin are divided into two scenarios. Scenario A and Scenario B represent the heavy rainfall centers located in the region from LD to PBG and in the upper reaches of LD, respectively. There is a good relation between the water vapor inflow index and the basin’s surface mean rainfall, so water vapor amplification and water vapor efficiency amplification methods can be applied to calculate PMP in the basin. These dew points are generally obtained from long observation records from the 1951–2007 period, at Xichang, Zhaojue, Yibin, and Yuexi stations in the basin. The PMP was estimated for the catchments upstream of the four stations. The representative perceptible water values of each station were calculated based on the water vapor data of the heavy rainfall event in September 1989. Specifically, the two scenarios only refer to the 7-day rainfall process, and the data was calculated using the Tyson polygon method in terms of the point rainfall data collected from the corresponding control rainfall stations.
The PMP–PMF transformation was performed with an appropriate rainfall–runoff simulation model, whose parameters had been previously calibrated for the catchment in study [29]. Because there are various rainfall scenarios, the transformed PMFs were different accordingly. Based on the two rainfall scenarios, the corresponding PMFs can be obtained. According to the measured runoff data and the analyzed historical flood data of the hydrological station in the basin, the flood event in September 1981 with a high peak and a large volume, influencing the upper, middle, and lower reaches, was adopted as the typical flood to calculate the PMF by means of the runoff yield and concentration calculation.
The inflow hydrographs of each reservoir were obtained by enlarging the typical flood hydrograph with the same multiple ratio method for the specific PMF, and the time intervals of typical and simulated flood hydrographs were identical. Figure 3 shows the simulated flood hydrographs of each studied reservoir for Scenarios A and B, which could be used in the reservoir routing, combined with the specific operation rules, to analyze the HWL ranges of each reservoir under different scenarios, and the related calculation results are shown in Table 9.
Using Equations (1), (5), and (6) to calculate the TRFs of the selected dams in the two scenarios respectively, the dams were ranked by decreasing the calculated TRFs, and the results are shown in Table 10 and Figure 4.
It can be seen in Table 10 that the safety performance of the dams in terms of flood hazard caused by heavy rainfall in Scenario A is better, which is reflected by the relatively lower TRFs and relatively lower risk ratings. This is because, in Scenario A, the rainfall was mainly concentrated in the region from the LD dam to the PBG dam, where the DGS dam, a double curvature arch dam with a dam height more over 200 m, and the PBG dam, a dam with a reservoir capacity of more than 5 billion m3, are located.
Only the SJK dam was identified with different risk classes and ratings in the two scenarios. The SJK dam with a reservoir capacity of 28.97 m3, as a control project, has functions of energy and flood control. If it is broken, the downstream cascade reservoirs will be catastrophically damaged. Therefore, the SJK dam is the most sensitive in the different scenarios. Figure 4 also intuitively confirms these viewpoints.

In the study, a new computational methodology of dam risk analysis under flood hazards is proposed and used to assess the total risk rating and risk classes of six large dams in Dadu River Basin, Southwestern China, in two different scenarios. The following results can be concluded:
(1) Greatly different from the originally TRF method under seismic hazards, the proposed method, the so-called extended TRF method under flood hazards, assigns various risk factor weights to each large dam, highlights how to estimate the structure influence, rate flood vulnerability, and determine downstream risk potential, and can be used to quickly obtain and compare the risk potential associated with different dams in any postulated flood scenario.
(2) The method is easily applicable and efficient for the analysis of large dam-related flood risk and can be applied regardless of non-linear problems inherent to indicator-based risk assessment and without the need of large samples of historical data, which is necessary for probability-based risk estimation.
(3) The risk assessment results can provide reasonable guidance for risk managers to make more detailed estimations of dam flood disasters, to develop public awareness in terms of describing in detail the consequences of different flood scenarios, and to support the development and prioritization of mitigation strategies in a long-term effort to reduce the vulnerability of the Dadu River Basin to floods. Moreover, to better understand changes in flood hazard over time, the historical floods reconstruction method and the method of incorporating satellite imagery and aerial photography during peak flow to observe the dynamics of modern floods can be combined to lengthen the flood records of rare and extreme flood events. The simulated flooding areas can then be computed using recent advanced mathematical models, such as GeoClaw, Open Telemac, and DassFlow-Shallow.
(4) Except for the SJK dam, all of the dams had the same risk rating and risk classes in both scenarios. The dams with high risk were concentrated in the regions from LD to PBG, which means the floods that were caused by different rainfall centers influenced the dams at different levels, which can be seen as a direct instruction to risk managers. 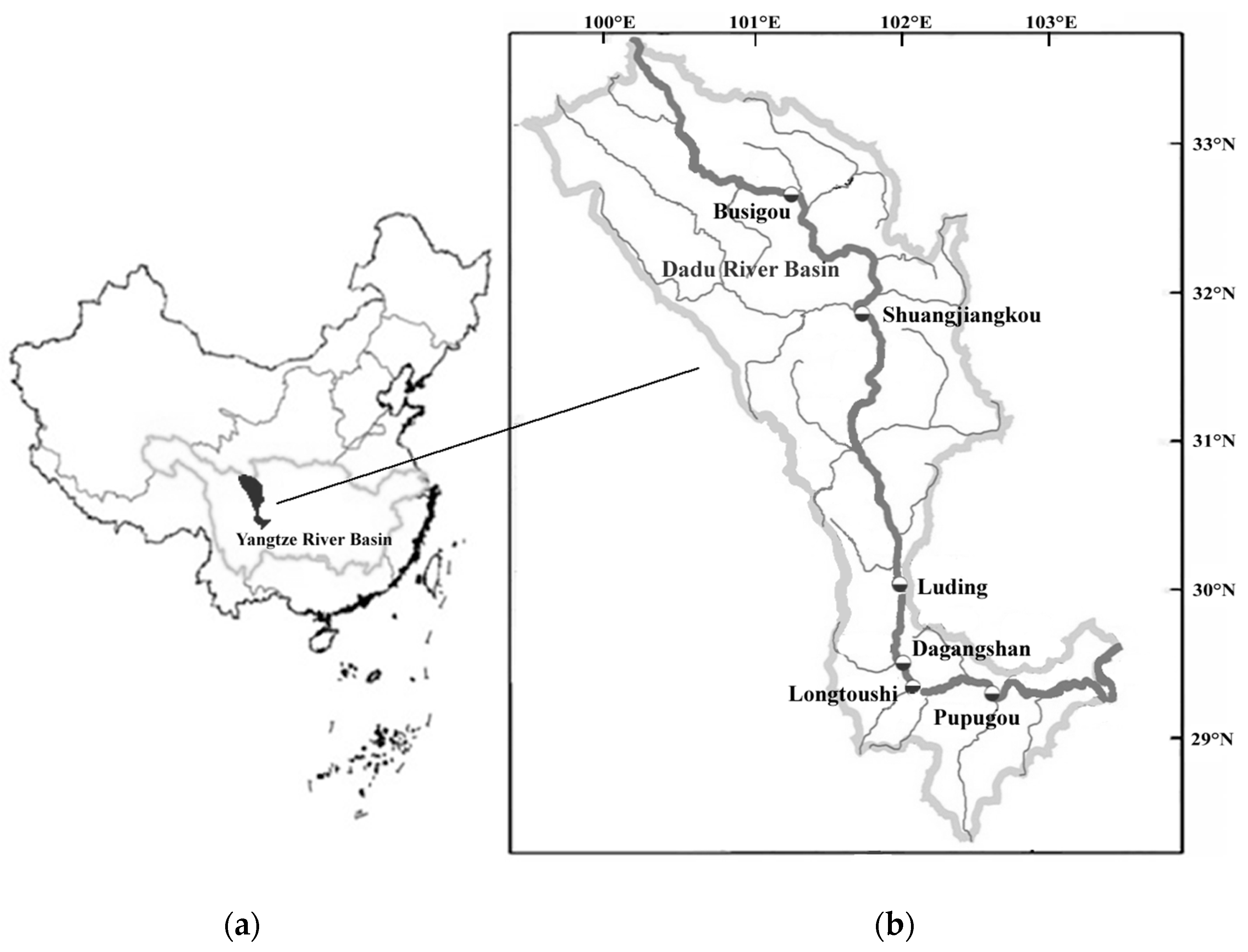 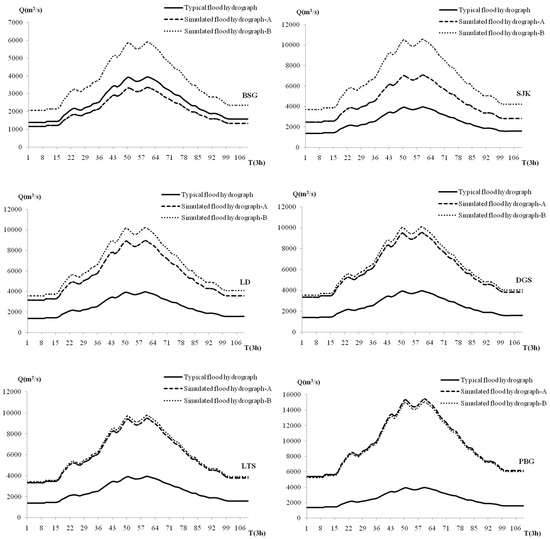 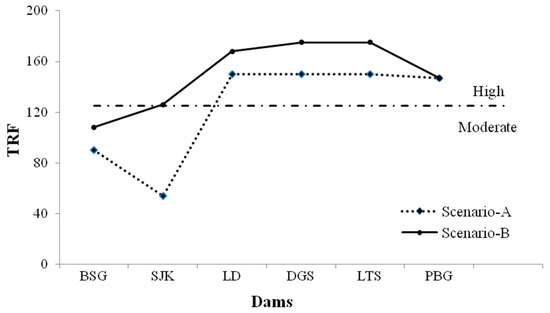