Quantification of Submarine Groundwater Discharge in the Gaza Strip

Gaza Strip has suffered from seawater intrusion during the past three decades due to low rainfall and high abstraction from the groundwater resource. On a yearly basis, more than 170 million m3 of groundwater is abstracted, while the long-term average recharge from rainfall is 24.4 million m3/year. Submarine groundwater discharge (SGD) has never been studied in the Gaza Strip, due to lack of experience in this field, next to the ignorance of this subject due to the seawater intrusion process taking place. Continuous radon measurements were carried out in six sites along the Gaza Strip to quantify the SGD rate. The final result shows SGD to occur in all sampled sites. The range of SGD rates varies from 0.9 to 5.9 cm·day−1. High values of SGD are found in the south (Rafah and Khan Younis governorates). The high values are probably related to the shallow unconfined aquifer, while the lowest values of SGD are found in the middle of Gaza Strip, and they are probably related to the Sabkha formation. In the north of Gaza Strip, SGD values are in the range of 1.0 to 2.0 cm·day−1. Considering that SGD would occur with the measured rates in a strip of 100 m wide along the whole coast line, the results in a quantity of 38 million m3 of groundwater being discharged yearly to the Mediterranean Sea along Gaza coast. Nutrient samples were taken along Gaza Strip coastline, and they were compared to the onshore wells, 600 m away from the Mediterranean Sea. The results show that SGD has higher NO3− + NO2− than nutrient-poor seawater, and that it is close to the onshore results from the wells. This confirms that the source of SGD is groundwater, and not shallow seawater circulation. In a coastal strip of 100 m wide along the Gaza coast, a yearly discharge of over 400 tons of nitrate and 250 tons of ammonium occurs from groundwater to the Mediterranean Sea. View Full-Text
Keywords: SGD; SGD model; Radon; coastal aquifer; nutrient discharge; Gaza Strip SGD; SGD model; Radon; coastal aquifer; nutrient discharge; Gaza Strip
►▼ Show Figures 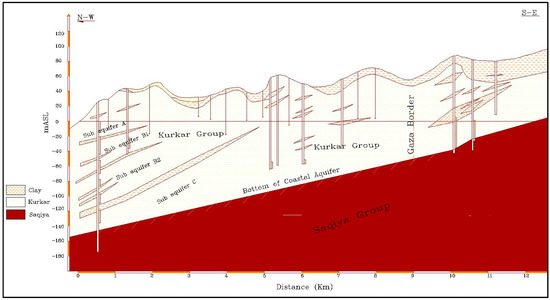