This work presents the results of the numerical study implemented for the natural area of Lido di Spina, a touristic site along the Italian coast of the North Adriatic Sea, close to the mouth of River Reno. High-resolution simulations of nearshore dynamics are carried out under climate change conditions estimated for the site. The adopted modeling chain is based on the implementation of multiple-nested, open-source numerical models. More specifically, the coupled wave-2D hydrodynamics runs, using the open-source TELEMAC suite, are forced at the offshore boundary by waves resulting from the wave model (SWAN) simulations for the Adriatic Sea, and sea levels computed following a joint probability analysis approach. The system simulates present-day scenarios, as well as conditions reflecting the high IPCC greenhouse concentration trajectory named RCP8.5 under predicted climate changes. Selection of sea storms directed from SE (Sirocco events) and E–NE (Bora events) is performed together with Gumbel analysis, in order to define ordinary and extreme sea conditions. The numerical results are here presented in terms of local parameters such as wave breaking position, alongshore currents intensity and direction and flooded area, aiming to provide insights on how climate changes may impact hydrodynamics at a site scale. Although the wave energy intensity predicted for Sirocco events is expected to increase only slightly, modifications of the wave dynamics, current patterns, and inland flooding induced by climate changes are expected to be significant for extreme conditions, especially during Sirocco winds, with an increase in the maximum alongshore currents and in the inundated area compared to past conditions. View Full-Text
Keywords: climate changes; sea-level rise; TELEMAC; natural beach; flooded area climate changes; sea-level rise; TELEMAC; natural beach; flooded area
►▼ Show Figures 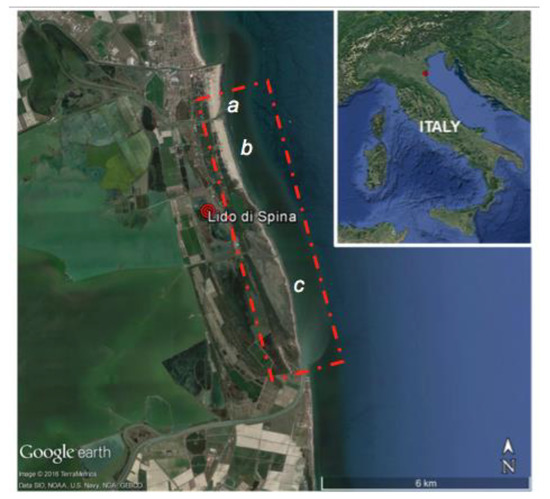