Challenges and Opportunities for Data Assimilation in Mountainous Environments

Agricultural soils in Canada have been observed to emit a large pulse of nitrous oxide (N2O) gas during the spring thaw, representing a large percentage of the annual emissions. We report on three years of spring thaw N2O flux measurements taken at three Alberta agricultural sites: a crop production site (Crop), cattle winter-feeding site (WF), and a cattle winter-grazing site (WG). Soil fluxes were calculated with a micrometeorological technique based on the vertical gradient in N2O concentration above each site measured with an open-path (line-averaging) FTIR gas detector. The Crop and WG sites showed a clear N2O emission pulse lasting 10 to 25 days after thawing began. During this pulse there was a strong diurnal cycle in emissions that paralleled the cycle in near-surface soil temperature. The emission pulse was less pronounced at the WF site. The average spring thaw losses (over 25 to 31 days) were 5.3 (Crop), 7.0 (WF), and 8.0 (WG) kg N2O-N ha−1, representing 1 to 3.5% of the annual nitrogen input to the sites. These large losses are higher than found in most previous western Canadian studies, and generally higher than the annual losses estimated from the Intergovernmental Panel on Climate Change and Canadian National Inventory Report calculations. The high N2O losses may be explained by high soil nitrate levels which promoted rapid denitrification during thawing. The application of a high resolution (temporal) micrometeorological technique was critical to revealing these losses. View Full-Text
Keywords: nitrous oxide; spring thaw; FTIR; flux chambers; inverse dispersion; flux-gradient nitrous oxide; spring thaw; FTIR; flux chambers; inverse dispersion; flux-gradient
►▼ Show Figures 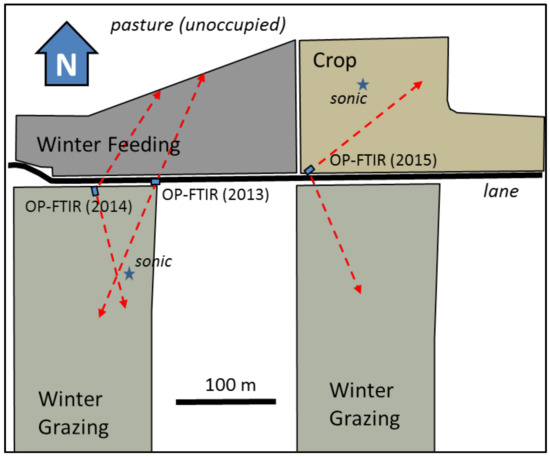