Intercomparison of MODIS and VIIRS Fire Products in Khanty-Mansiysk Russia: Implications for Characterizing Gas Flaring from Space
Next Article in Special Issue

Future Changes in Global Precipitation Projected by the Atmospheric Model MRI-AGCM3.2H with a 60-km Size

Article
Understanding the Partitioning of the Available Energy over the Semi-Arid Areas of the Loess Plateau, China
by

Mass and energy exchanges between the land surface and atmosphere are key components of land-atmosphere interactions [1,2,3]. Sensible heat flux and latent heat flux, key variables in energy and water vapor exchanges between the land surface and atmosphere, drive the dynamics of the Earth's major water, energy, and biogeochemical cycles [4,5] and concurrently govern the evolution and characteristics of the planetary boundary layer, such as its depth, thermodynamic behavior, the surface air temperature, and humidity [6,7]. The available energy, which is the difference between the net radiation and soil heat flux, is partitioned into the sensible heat flux and latent heat flux [8,9]. This partitioning of available energy has an important effect on regional climates, the water cycle, boundary layer characteristics, and cloud development [10,11,12,13]. The key issues concerning energy partitioning are the differences in partitioning across different climates and ecosystems and the mechanisms behind these differences [14].
Numerous studies have investigated energy partitioning. Zeng et al. [15] used a series of Weather Research and Forecasting (WRF) model simulations to investigate the sensitivity of high-temperature weather to soil moisture over the humid region in East China and found that soil moisture affected the high temperature by influencing the partitioning of energy. Zhang et al. [16] conducted two long-term simulations using WRF to assess the contribution of land-atmosphere coupling to the interannual variability of summer climate over East Asia, showing that soil moisture-temperature coupling is largely determined by the ability of soil moisture to affect surface fluxes. Cho et al. [17] evaluated the effect of temperature on land surface energy partitioning using measurement data from 25 FLUXNET sites (http://fluxne t.ornl.gov/). A negative relationship was found between Bowen ratio (the ratio of the sensible heat flux to the latent heat flux) and temperature, and this relationship was stronger above less vegetated surfaces with low vapor pressure deficit (VPD) and low amounts of received radiation energy. The partitioning of available energy is influenced by the soil moisture, net radiation, VPD, vegetation condition, and temperature. Based on previous studies that primarily focused on the land-atmosphere interactions affecting temperature or precipitation by influencing energy partitioning, little attention has been paid to analyzing the mechanism of available energy partitioning because of the difficulties in this analysis. The factors that influence the energy partitioning are closely related. On the one hand, soil moisture changes the upward shortwave and longwave radiation by influencing the albedo and emissivity, consequently changing the net radiation. There is also a close relationship between the soil moisture and vegetation. Furthermore, numerous studies have found that soil moisture can affect temperature through changes in the sensible and latent heat flux. On the other hand, changing the partitioning of energy can also influence these factors. The combination of an increasing sensible heat flux and decreasing latent heat flux would enhance the temperature, decrease the relative humidity and precipitation, and intensify drought. In summary, all these aspects complicate the relationship between these factors and energy partitioning [18,19]. This paper aims to answer the questionof how soil moisture, net radiation, and VPD affect the partitioning of available energy over the semi-arid areas of the Loess Plateau in China.
Arid and semi-arid regions account for approximately one-third of the Earth’s surface land area [20]. As the largest arid and semi-arid zone in China, the Loess Plateau is sensitive to climate change [21,22,23]. Land-atmosphere interactions in this area do not only have a significant impact on the regional climate but also affect the monsoon circulation in China [24]. As of April 2014, FLUXNET had established 683 tower sites to operate on a long-term and continuous basis. These sites are less distributed in arid and semi-arid areas, limiting the research on the land-atmosphere interactions over arid and semi-arid regions.
The Semi-Arid Climate and Environment Observatory of Lanzhou University (SACOL) has filled the gap in long-term and continuous observations over the semi-arid regions of the Loess Plateau in northwest China, providing convenient conditions for studying the mechanism of available energy partitioning over semi-arid regions. Soil moisture impacts are suggested to be larger than oceanic impacts over continental mid-latitudes during warmer seasons [25,26,27,28]. With all these considerations in mind, the soil moisture, net radiation, and atmospheric humidity during the summer of 2007–2008 were classified to research the effects of atmospheric and surface conditions on energy partitioning.

2. Station, Data, and Method of Analysis

SACOL was established in 2005 and is located at 35.946° N, 104.137° E at an altitude of 1965.8 m, approximately 48 km from the center of Lanzhou in the semi-arid regions of China. The topography around the site is characterized by the Loess Plateau, consisting of plains, ridges, and mounds, with elevations ranging between 1714–2089 m. The parent soil material is mainly Quaternary aeolian loess, with the main soil type being sierozem. With international advanced instruments, SACOL, as one of the reference sites of the international Coordinated Energy and Water Cycle Observations Project (CEOP), is the second long-term observation station constructed over a semi-arid area in China, following the Chinese Academy of Sciences’ Jilin Tongyu station (44.25° N, 122.52° E). The flat terrain around the station expands approximately 200 m from east to west and more than 1000 m from north to south. The dominant species covering the surface are Stipa bungeana, as well as Artemisia frigida and Leymus secalinus. The height of vegetation is about 0.24 m in summer and 0.10 m in winter. SACOL has a temperate semi-arid climate with an annual average temperature of 6.7 °C and an annual rainfall of 381.8 mm, the highest average temperature of approximately 20 °C occurs in July, and the maximum precipitation of approximately 90 mm occurs in August. For more information about SACOL, please refer to Huang et al. [29].

To gain an insight into the mechanism of available energy partitioning over the semi-arid regions, we analyzed the eddy covariance (EC) data including the sensible heat flux and latent heat flux, surface radiation, and boundary layer meteorological parameters including air temperature, relative humidity, precipitation, and soil moisture during daytime from 1 June to 31 August during 2007 and 2008.
The fluxes of sensible and latent heat were measured at 3.0 m using a three-axis sonic anemometer (CSAT3, Campbell, Camden, NJ, USA) that measured u, v, w and the sonic temperature and an open-path infrared CO2 and H2O analyzer (LI7500, LI-COR,) that measured the density of water vapor. These signals were logged by a data logger (CR5000, Campbell) at 10 Hz. Necessary corrections and quality controls of the turbulent fluxes, such as eliminating spikes [30], coordinate rotation [31], sonic temperature correction [9,32], Webb_Pearman_Leuning (WPL) density correction (correction for density fluctuations) [33], test of stationary [34] and integral turbulent characteristics [35], were applied to obtain high quality data. For more information about the data processing, please refer to Yuan et al. [36].
The surface radiation was measured at 1.5 m with upward and downward pyranometers (CM21, Kipp and Zonen, Delftechpark, Netherlands) for outgoing and incoming shortwave radiation and upward and downward pyrgeometers (CG4, Kipp and Zonen) for outgoing and incoming longwave radiation. The VPD was calculated from the air temperature and relative humidity (HMP45C-L, Vaisala, Vantaa, Finland) which were measured at 1, 2, 4, 8, 12, 16, and 32 m. The soil moisture was measured using five water content reflectometers (CS616-L, Campbell) at 0.05, 0.10, 0.20, 0.40, and 0.80 m depth and the average of five layers was used to classify dry and wet conditions. Precipitation was measured with a tipping bucket rain gauge (TE525MM-L, Texas Electronics, Dallas, TX, USA) at 0.30 m.

The soil moisture, net radiation, and atmospheric humidity data during the summer of 2007–2008 were used to study the effects of atmospheric and surface conditions on energy partitioning. The effect of wind speed on energy partitioning was found to be insignificant at our site (results not shown here). Hence, wind speed was not considered for the analyses presented in this study. The Bowen ratio can be used as an indicator of the available energy partitioning. Notably, the soil moisture, net radiation, and VPD are interactional when analyzing their effects on energy partitioning. Soil moisture influences the net radiation through the effects on surface albedo, emissivity, and water vapor evaporation in the air. The surface albedo decreases with increasing soil moisture, thereby weakening the upward shortwave radiation. At the same time, the increasing soil moisture could increase the emissivity, further enhancing the upward longwave radiation. Moreover, the evaporation of water vapor in the air induced by increasing soil moisture exerts greenhouse effects and strengthens the downward longwave radiation. Soil moisture and VPD are correlated such that very high (low) VPD may not occur when soil is wet (dry) [37]. Therefore, the soil moisture, net radiation, and VPD are divided into two, four, and four levels, respectively, thus ensuring that the effects of the other two factors can be neglected when discussing the effects of one factor on the energy partitioning. Considering the differences after classification and the amount of data, the net radiation is divided into four levels, <150, 150–300, 300–500, and >500 W m−2 and the VPD is divided into four levels, <6, 6–12, 12–20, and >20 hPa.
Mohan and Rao [38] and Sandeep et al. [39] described a methodology to identify wet and dry episodes using rainfall data. The present study uses a similar classification method but for soil moisture. The period is considered as wet (dry) if the soil moisture is higher (lower) than the soil moisture threshold (defined as the average of six years 2007–2012) on the same calendar day for at least three continuous days. Additionally, one or two days in an extended wet (dry) episode are considered as wet (dry) even if the soil moisture on those days is less (more) than the threshold. Figure 1 depicts the procedure for identifying wet/dry days during the summer of 2007–2008. Precipitation influences the accuracy of latent heat flux data, therefore, days with rainfall (green bars in Figure 1) are excluded.

3.3. Effects of VPD on Energy Partitioning

4.3. Direct and Indirect Effects of VPD

The authors would like to thank the Semi-Arid Climate and Environment Observatory of Lanzhou University (SACOL) for providing the observational data. This research was supported by the National Natural Science Foundation of China (41475008, 41521004, 41605005).

Lei Zhang provided the initial idea of this paper. Guanghui Yuan processed and analyzed the data and wrote the paper under the guidance of Lei Zhang. Jiening Liang, Xianjie Cao, Hui Liu, and Zhaohong Yang provided the observation data and offered useful suggestions for data processing. 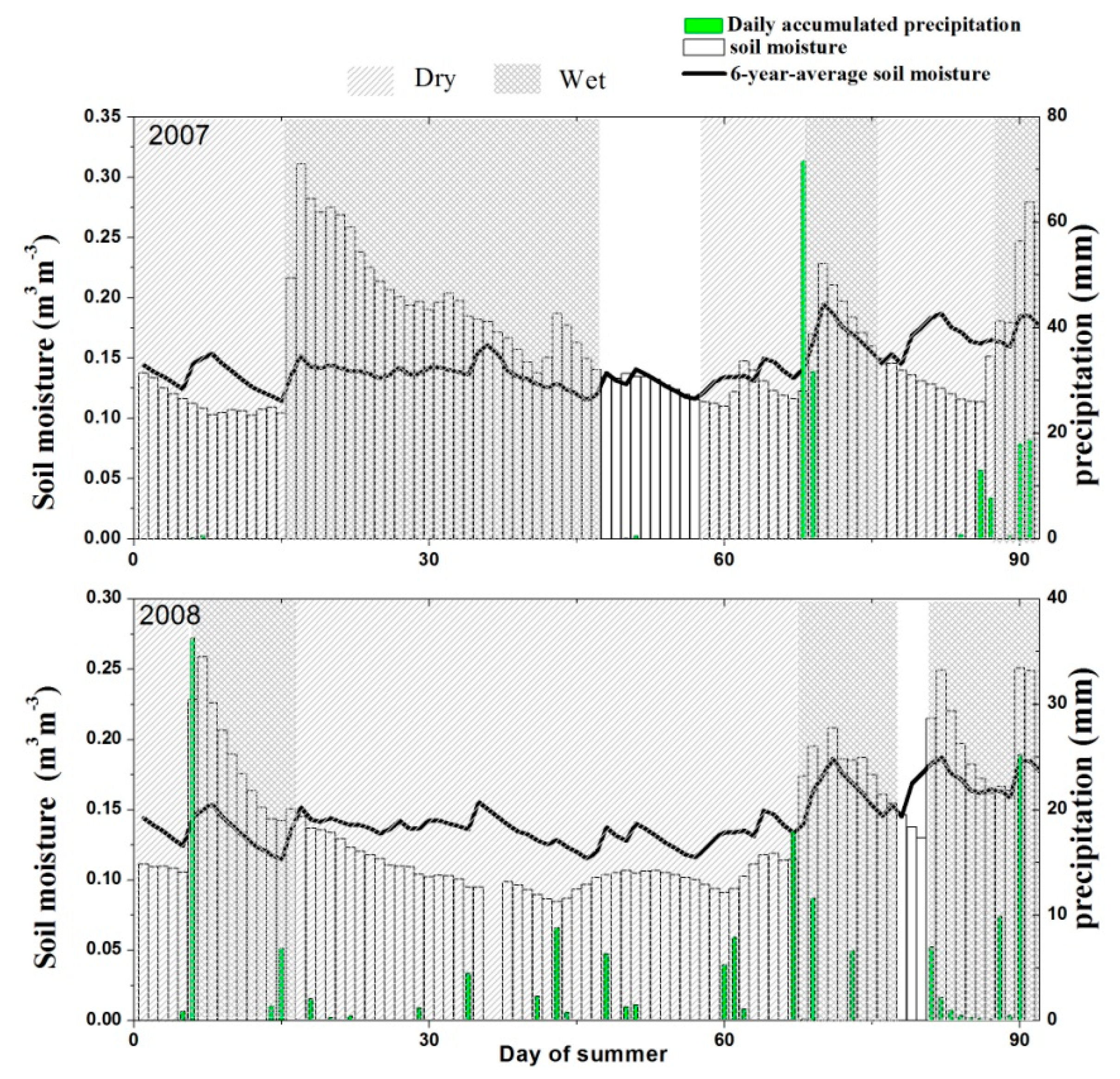 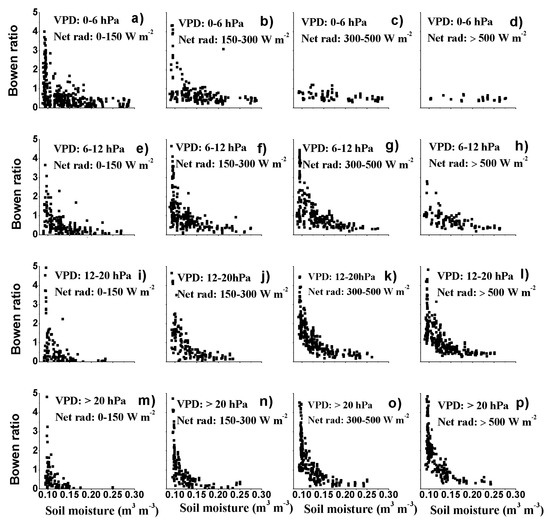 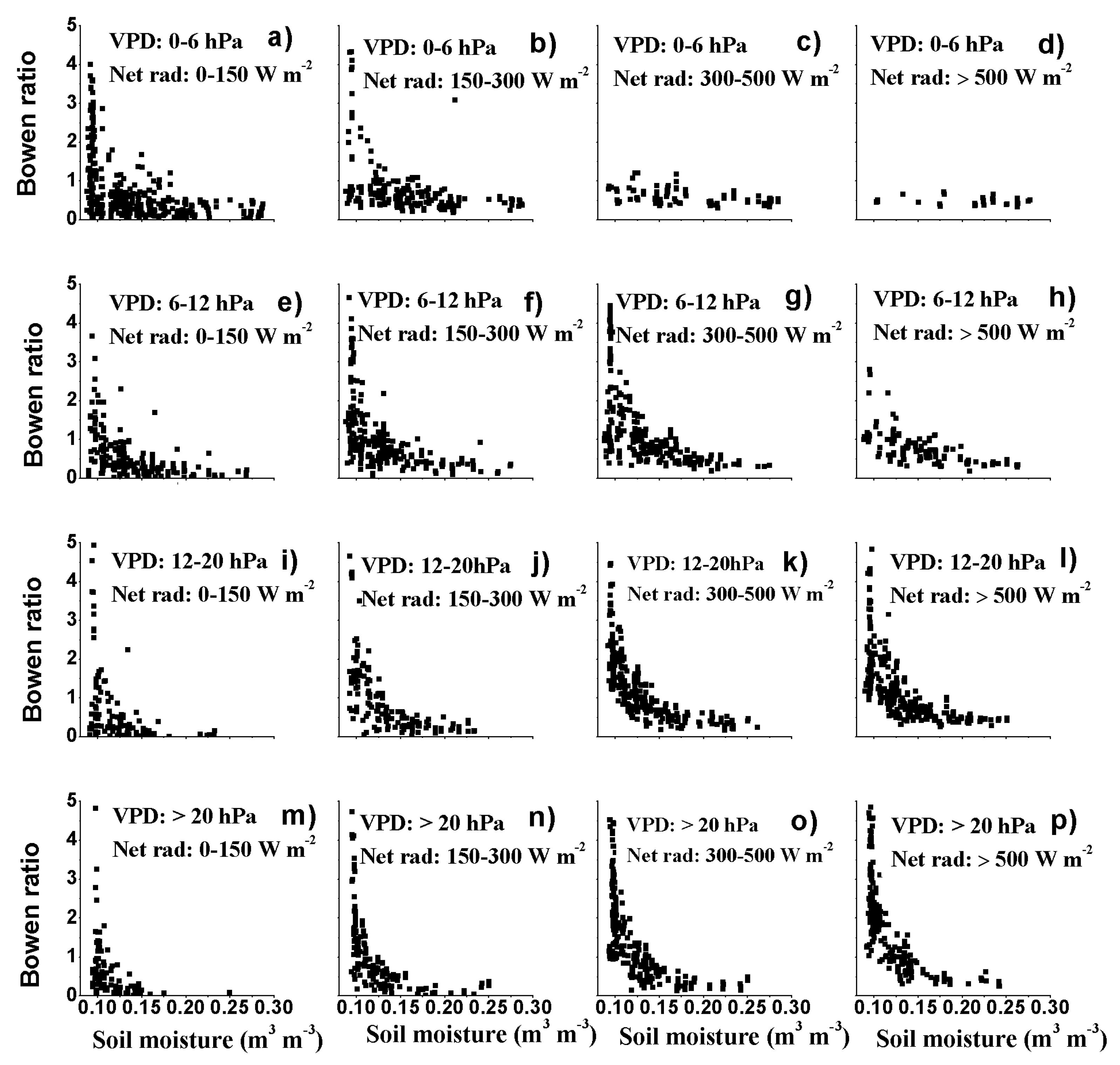 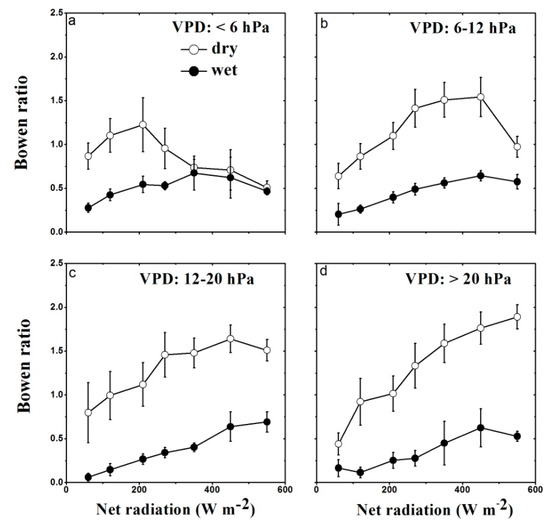 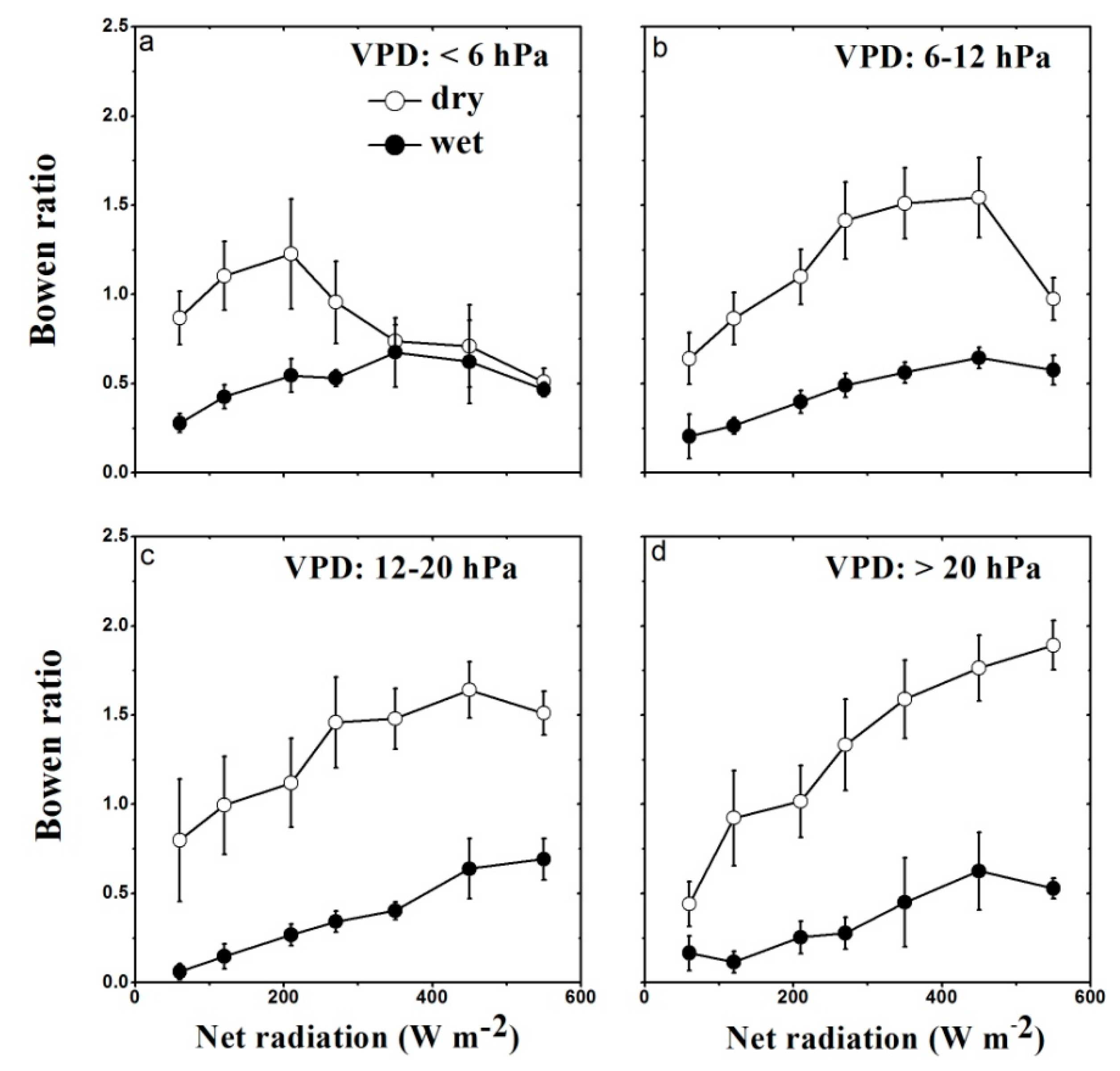 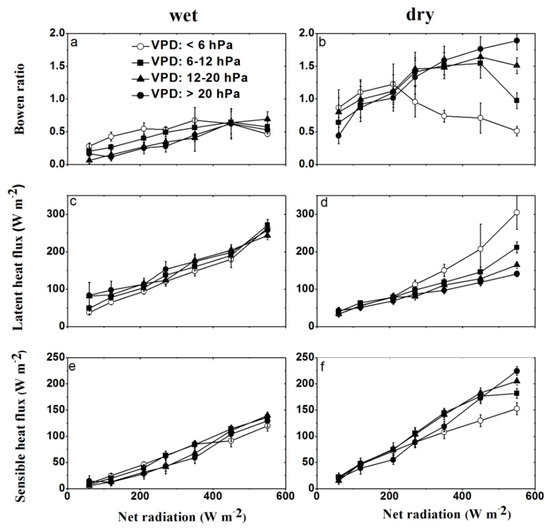 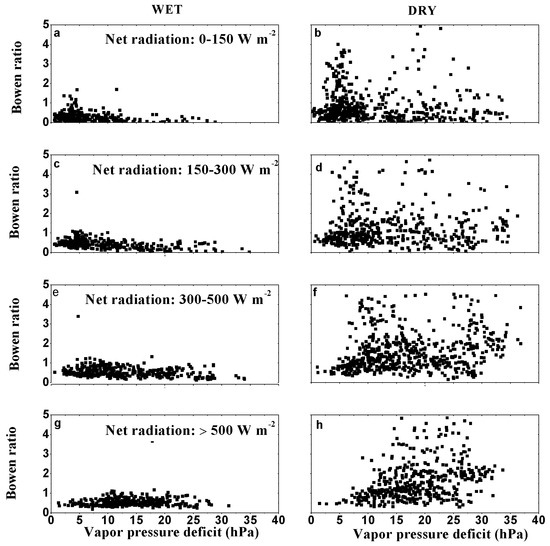 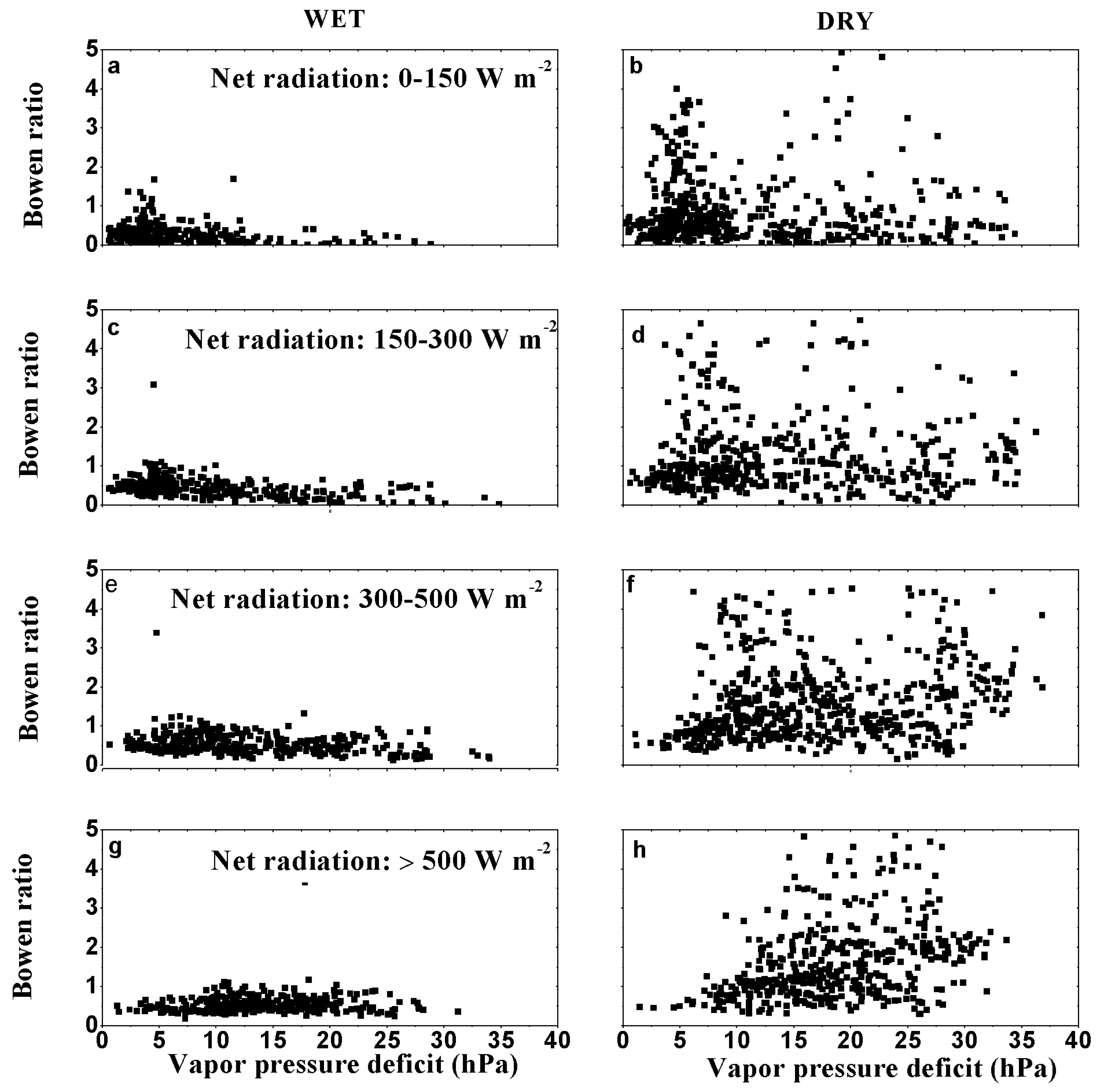 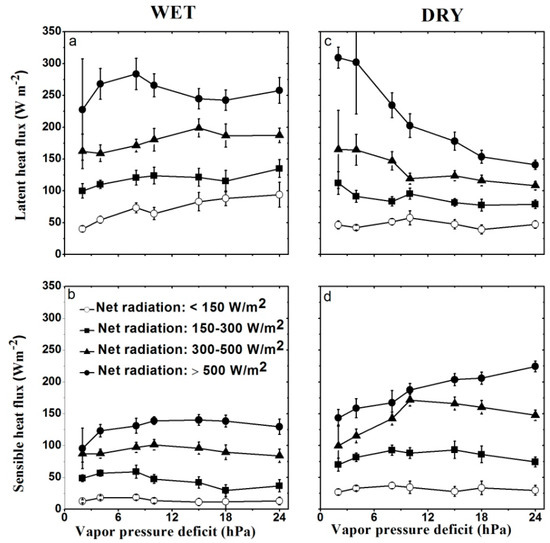