Acknowledgement to Reviewers of Atmosphere in 2016

The properties of the long-term oscillations in the middle atmosphere have been investigated using the Sounding of the Atmosphere using Broadband Emission Radiometry (SABER) temperature data and Fabry–Perot interferometer (FPI) data. Results for SABER temperature show that the semiannual oscillation (SAO) has three amplitude maxima at altitudes of 45, 75, and 85 km, respectively, and shows prominent seasonal asymmetries there. The SAOs in the upper mesosphere (75 km) are out of phase with those in the mesopause (85 km) in the tropical regions, which can generate an enhancement of 11 K on average at each equinox, contributing to the lower mesospheric inversion layer (MIL). It is shown that stronger enhancement can be found at the spring equinox than at the autumn equinox. The triennial oscillation (TO) is significant in the tropical region. The spectral peak of the TO is probably a sub-peak of the quasi-biennial oscillation (QBO) and is due to modulation of QBO. In addition, there may be potential interaction of the TO with SAO at 85 km at the equator. The relation between ENSO and TO has also been discussed. The ENSO signal may modulate the amplitude of the TO, mainly in the lower stratosphere. The annual oscillation (AO) and SAO are analyzed over Kelan by FPI data. Generally, the amplitudes of FPI wind are smaller than those of the Horizontal Wind Model (HWM07). The comparison between FPI and TIMED Doppler Interferometer (TIDI) winds shows relatively large discrepancy. This may be due to the tidal aliasing in the nighttime results derived from the FPI data. Results also show that the algorithm to derive FPI temperature needs improvements. View Full-Text
Keywords: SAO; TO; MIL; amplitude; phase SAO; TO; MIL; amplitude; phase
►▼ Show Figures 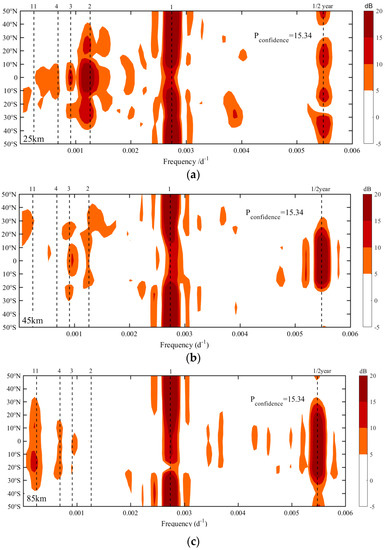