Varied Genomic Responses to Maladaptive Gene Flow and Their Evidence

The Genetics of a Behavioral Speciation Phenotype in an Island System

Mating behavior divergence can make significant contributions to reproductive isolation and speciation in various biogeographic contexts. However, whether the genetic architecture underlying mating behavior divergence is related to the biogeographic history and the tempo and mode of speciation remains poorly understood. Here, we use quantitative trait locus (QTL) mapping to infer the number, distribution, and effect size of mating song rhythm variations in the crickets Laupala eukolea and Laupala cerasina, which occur on different islands (Maui and Hawaii). We then compare these results with a similar study of an independently evolving species pair that diverged within the same island. Finally, we annotate the L. cerasina transcriptome and test whether the QTL fall in functionally enriched genomic regions. We document a polygenic architecture behind the song rhythm divergence in the inter-island species pair that is remarkably similar to that previously found for an intra-island species pair in the same genus. Importantly, the QTL regions were significantly enriched for potential homologs of the genes involved in pathways that may be modulating the cricket song rhythm. These clusters of loci could constrain the spatial genomic distribution of the genetic variation underlying the cricket song variation and harbor several candidate genes that merit further study. View Full-Text
Keywords: speciation; sexual isolation; quantitative genetics; transcriptome; Laupala speciation; sexual isolation; quantitative genetics; transcriptome; Laupala
►▼ Show Figures 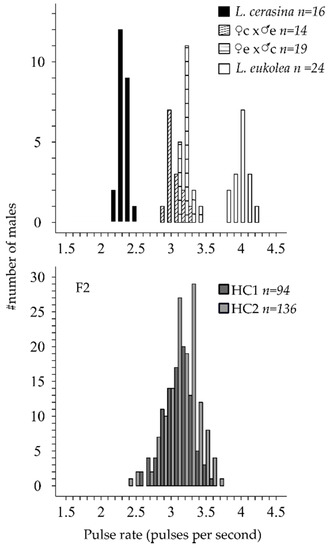