Sex chromosomes form once recombination is halted around the sex-determining locus between a homologous pair of chromosomes, resulting in a male-limited Y chromosome. We recently characterized the nascent sex chromosome system in the Trinidadian guppy (Poecilia reticulata). The guppy Y is one of the youngest animal sex chromosomes yet identified, and therefore offers a unique window into the early evolutionary forces shaping sex chromosome formation, particularly the rate of accumulation of repetitive elements and Y-specific sequence. We used comparisons between male and female genomes in P. reticulata and its sister species, Endler’s guppy (P. wingei), which share an ancestral sex chromosome, to identify male-specific sequences and to characterize the degree of differentiation between the X and Y chromosomes. We identified male-specific sequence shared between P. reticulata and P. wingei consistent with a small ancestral non-recombining region. Our assembly of this Y-specific sequence shows substantial homology to the X chromosome, and appears to be significantly enriched for genes implicated in pigmentation. We also found two plausible candidates that may be involved in sex determination. Furthermore, we found that the P. wingei Y chromosome exhibits a greater signature of repetitive element accumulation than the P. reticulata Y chromosome. This suggests that Y chromosome divergence does not necessarily correlate with the time since recombination suppression. Overall, our results reveal the early stages of Y chromosome divergence in the guppy. View Full-Text
Keywords: sex chromosomes; Y-chromosome; heterochromatin; Poecilia; guppies; sex determination; pigmentation sex chromosomes; Y-chromosome; heterochromatin; Poecilia; guppies; sex determination; pigmentation
►▼ Show Figures 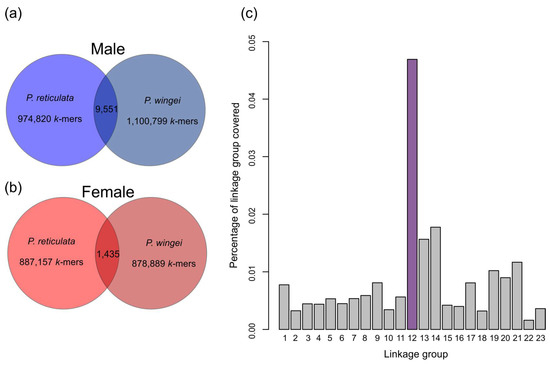