The Emerging Role of Epitranscriptomics in Cancer: Focus on Urological Tumors
Next Article in Special Issue

For the past three decades, Cupriavidus metallidurans has been one of the major model organisms for bacterial tolerance to heavy metals. Its type strain CH34 contains at least 24 gene clusters distributed over four replicons, allowing for intricate and multilayered metal responses. To gain organic mercury resistance in CH34, broad-spectrum mer genes were introduced in a previous work via conjugation of the IncP-1β plasmid pTP6. However, we recently noted that this CH34-derived strain, MSR33, unexpectedly showed an increased resistance to other metals (i.e., Co2+, Ni2+, and Cd2+). To thoroughly investigate this phenomenon, we resequenced the entire genome of MSR33 and compared its DNA sequence and basal gene expression profile to those of its parental strain CH34. Genome comparison identified 11 insertions or deletions (INDELs) and nine single nucleotide polymorphisms (SNPs), whereas transcriptomic analysis displayed 107 differentially expressed genes. Sequence data implicated the transposition of IS1088 in higher Co2+ and Ni2+ resistances and altered gene expression, although the precise mechanisms of the augmented Cd2+ resistance in MSR33 remains elusive. Our work indicates that conjugation procedures involving large complex genomes and extensive mobilomes may pose a considerable risk toward the introduction of unwanted, undocumented genetic changes. Special efforts are needed for the applied use and further development of small nonconjugative broad-host plasmid vectors, ideally involving CRISPR-related and advanced biosynthetic technologies. View Full-Text
Keywords: Cupriavidus; heavy metals; genomic islands; genomic rearrangements; metal resistance genes Cupriavidus; heavy metals; genomic islands; genomic rearrangements; metal resistance genes
►▼ Show Figures 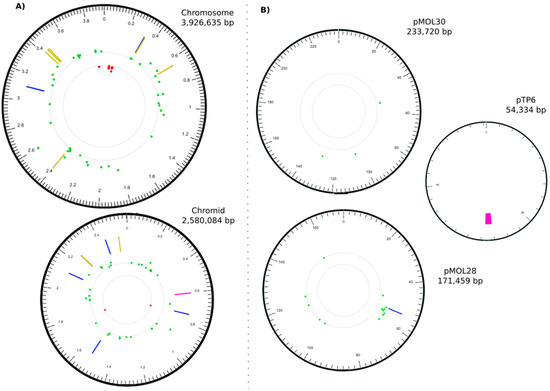