Clinical Implications of Hepatitis B Virus RNA and Covalently Closed Circular DNA in Monitoring Patients with Chronic Hepatitis B Today with a Gaze into the Future: The Field Is Unprepared for a Sterilizing Cure

An estimated 250 million humans [1] are chronically infected with hepatitis B virus (HBV), causing an estimated 887,000 annual deaths, mostly due to the long-term sequelae liver cirrhosis and hepatocellular carcinoma (HCC) [2]. The viral population can be divided into nine genotypes (A to I) [3,4] which differ in more than 7.5% of their nucleotide sequences [3,4] and which are further subdivided into subgenotypes with a nucleotide divergence greater than 4% [3,4]. While genotypes A to H have long been accepted as individual genotypes, two new genotypes (I and J) were proposed more recently [5,6]. Genotype I was first described in 2008 after isolation from a Vietnamese patient and constitutes a recombination of genotypes A, C and G [5]. Since the nucleotide divergence, especially compared to genotype C, is relatively small, it was long debated if this strain should be considered a new genotype [7]. Finally, the identification of similar HBV strains in Laos, North India and China in isolated native populations, indicating that the virus strains have circulated in these populations for a longer time, led to acceptance as an independent genotype [8,9,10]. Another strain, previously proposed to be a new genotype “J”, was isolated from a Japanese patient who had lived on Borneo island [6]. Phylogenetic analysis revealed that the strain rather resembles gibbon than human HBV, and may result from recombinations with human genotype C [11]. Since further reports of human infections with this strain are lacking, it has so far not been recognized as a relevant HBV genotype [11].
Sequencing and genotyping of HBV isolates is not routinely done and rarely reported in, e.g., epidemiological studies. Hepatitis B virus genotypes, however, vary in their clinical consequences including the natural course of infection, disease progression and treatment response (reviewed in [3,12,13]): While genotypes B, C and I are associated with a more frequent vertical transmission from mother to child, a higher transmission rate during sexual contact or injecting drug use has been reported for genotypes A, D and G [3,14,15,16]. A higher chronification rate after infections with genotypes A and C, compared to genotypes B and D, has also been reported [14], but may also be due to the transmission route. Among chronic HBV carriers, a lower rate of seroconversion to HBV-e-antigen antibodies (anti-HBe) was proposed in genotype C and D infections [14]. Also, a faster disease progressions to liver cirrhosis and HCC are associated with infections with genotypes C, D and F [14]. While all genotypes similarly respond to treatment with reverse transcriptase inhibitors, under interferon-α treatment, genotypes A and B show an increased virological response and higher anti-HBe seroconversion than other HBV genotypes [14,17].
The separation of the HBV population into different genotypes can be dated back 30 million years ago, when the ancestors of modern Homo sapiens dispersed across Africa and Eurasia [18]. The distinct appearances of genotypes and subgenotypes in certain geographical regions and ethnic groups [3,4,12] allow for the confirmation of prehistoric human migrations by the transfer of HBV genotypes and subtypes from one continent to another [3,19]. While previous studies described differences between local genotype appearances, the number of infections with each HBV genotype and the genotype distribution within global chronic HBV infections have not been studied. Given the specific characteristics of each HBV genotype, this information could, however, be valuable for precising the HBV disease burden and informing health policy, for example, by means of predicting and estimating prevention and treatment needs and relevance of specific treatments in a country. A further adaptation and rational application of diagnostic tests, as well as the development of new broadly applicable therapies, may also be stimulated by scoping HBV genotypes worldwide. We approached this need and performed a literature search for HBV genotyping studies and applied previously published HBV surface antigen (HBsAg) prevalence estimates [1] and United Nations (UN) population data [20] to approximate the number of HBV infections by each genotype per country, world region and globally.

A literature search was performed up to 23rd January 2018 using Google Scholar and the search terms: [Country Name] and [“HBV” or “Hepatitis B Virus”] and [“genotype”]. Countries entered were these for which HBsAg prevalence data were reported by Schweitzer et al. [1]. If no publications were found for a certain country, the search was repeated with names of major cities within the respective country instead of the country name. Additional publications were added after manually screening references in identified records. Publications were subjected to a two-step review. First, titles and abstracts in English, Spanish, French, German or Russian languages were screened with regard to the provision of HBV genotyping results. If a manuscript was not accessible, data were extracted from its abstract if possible or taken from a secondary publication. Publications before the year 2000 and duplicate records were excluded (Figure 1).
Other exclusion criteria applied during full text screening were:

From manuscripts, which were deemed relevant during the full text review, the following information was extracted (for variable characteristics, see Table S1 in Supplementary Materials):

A scoring system was developed for a descriptive assessment of the quality of genotyping data that were deemed relevant during full text screening.
The resulting score was fitted to a 1–10 scale.

If several sources provided genotyping results for a country, data from studies were aggregated by weighting each study by the proportion of genotyped samples it contributed. The other quality parameters were not included at this step. Inter-genotype recombinant viruses were not allocated to a specific genotype but reported separately together with co-infections with more than one genotype and samples, from which the genotype could not be determined (Table S1, Supplementary Materials).

2.5. Approximation of Number of Infections with Each Hepatitis B Virus Genotype

2.6. Creation of Maps and Additional Software

Maps were created using the Quantum Geographic Information System (QGIS) (http://www.qgis.org/en/site/) with the map file World Borders Dataset from Thematic Mapping (http://thematicmapping.org/downloads/world_borders.php) and the plugin MMQGIS (https://plugins.qgis.org/plugins/mmqgis/). The quality score was calculated in Microsoft Excel for Mac Version 16.13.1. Diagrams were created with Prism 6.0f for Mac. Custom scripts were coded in the Ruby programming language.

One thousand, six hundred and fifty records were identified through online search, and 35 additionally by screening references in identified records. Studies reporting HBV genotyping data, which were published between 1 January 2000 and 23 January 2018, were subjected to a selection process, as described in Figure 1 and ‘Materials and Methods’.
Two hundred and thirteen publications were included in the data aggregation (Table S1, File S1, Supplementary Materials), composed of 95% peer-reviewed and 5% non-peer-reviewed (e.g., posters) publications. The majority of samples were collected between the years 1996 to 2015, with oldest samples derived from 1984 (Figure S1A, Supplementary Materials). Publication dates were equally distributed across years 2000 to 2018 (Figure S1B, Supplementary Materials). In 62% of studies, the sampling region covered small towns or areas of a country, whereas 38% of studies collected samples from several regions or nationwide. The majority (75%) of studies sequenced the viral genome to determine the genotype, with 18% of studies sequencing the whole and 57% parts of the genome. Twenty-five percent of studies performed alternative, mostly probe- or PCR-based assays to determine the genotype. Overall, included records encompass genotyping results from 26,319 HBV-infected individuals from 125 countries. The availability and quality of data varied between countries (Table S1, Supplementary Materials, and Figure 2). According to the scoring system applied in this study, most relevant data were available for Denmark, China and Cuba, for which in recent years, large numbers of samples from HBV-infected individuals from several regions of the respective country were sequenced. In contrast, quality of data was assessed to be lowest for records from Sweden, Namibia, Ireland, Angola, Bolivia, Eritrea, Liberia and Sri Lanka. This was mostly due to a small number of samples derived from a single study site, which were analyzed using non-sequencing-based methods. When relating to the number of HBV infections, about 1/3rd of total HBV infections were represented by low (Scores 1–3), medium (Scores 4–7) or high (Scores 8–10) quality genotyping data. Quality was homogenously distributed across genotypes but rated best for genotypes B, C and I, mainly because of their frequent appearance in China for which good quality data were available (Figure S1C,D, Supplementary Materials).

In most European countries, genotypes A and D were found to be most common, with an increasing appearance of genotype A towards Northwestern Europe (Figure 3). In Eastern Europe and Western-, Central-, North- and South Asia as well as Northern Africa, genotype D was predominant without further genotypes present in a significant number. On the British Isles and Denmark, genotypes B and C were also common. In Eastern and Southeastern Asia, as well as Australasia and Oceania, genotype C was the most frequent genotype. Besides genotype C, genotype B also constituted a relative high proportion in China, Southeast Asia, and Australia, whereas genotype D was more frequent in Australasia and Oceania. One exception was the Philippines, where genotype A constituted about half of infections. In Sub-Saharan Africa (comprising Eastern Africa, Middle Africa, Southern Africa, and Western Africa), a distinct genotype distribution was found, with genotype E predominating in the western part, and decreasing proportions towards Eastern Africa, where, with the exception of Madagascar (genotype E), mainly genotype A was found. In Latin America, three genotypes (F, G and H) were found that are rare in other parts of the world. Genotype F was predominant in most Latin American countries, for which HBV sequencing data were identified. Brazil and Mexico differed from the other countries in the region. In Brazil, genotypes A and D dominated, and uniquely in Mexico, genotypes G (10.2%) and H (63.3%) were found in relevant numbers. Northern America and the Caribbean differed in their genotype distribution from Latin America. In Northern America, genotype A, B, C and D were predominant, whereas in the Caribbean, mainly genotype A, and, to a lesser extent, genotype D were found (for details, see Table S1, Supplementary Materials). Taken together, the HBV genotype distribution showed similar patterns between countries of the same world region but strongly varied between different parts of the world.

T.M. is supported by a Clinical Leave stipend of the Else Kröner Forschungskolleg “Antimikrobielle Trigger als Auslöser von Krankheiten” at Technical University Munich. The study was in part supported by the German research Foundation (DFG) via TRR179. 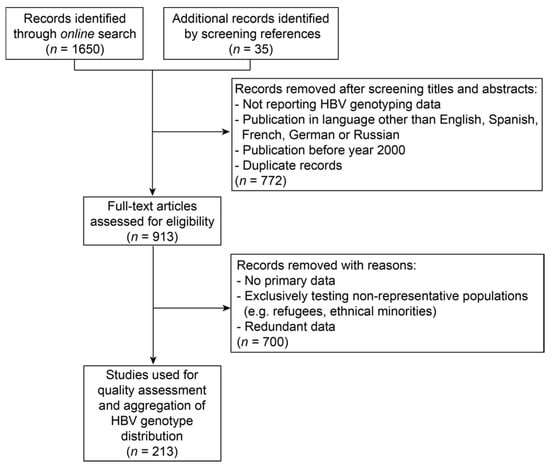 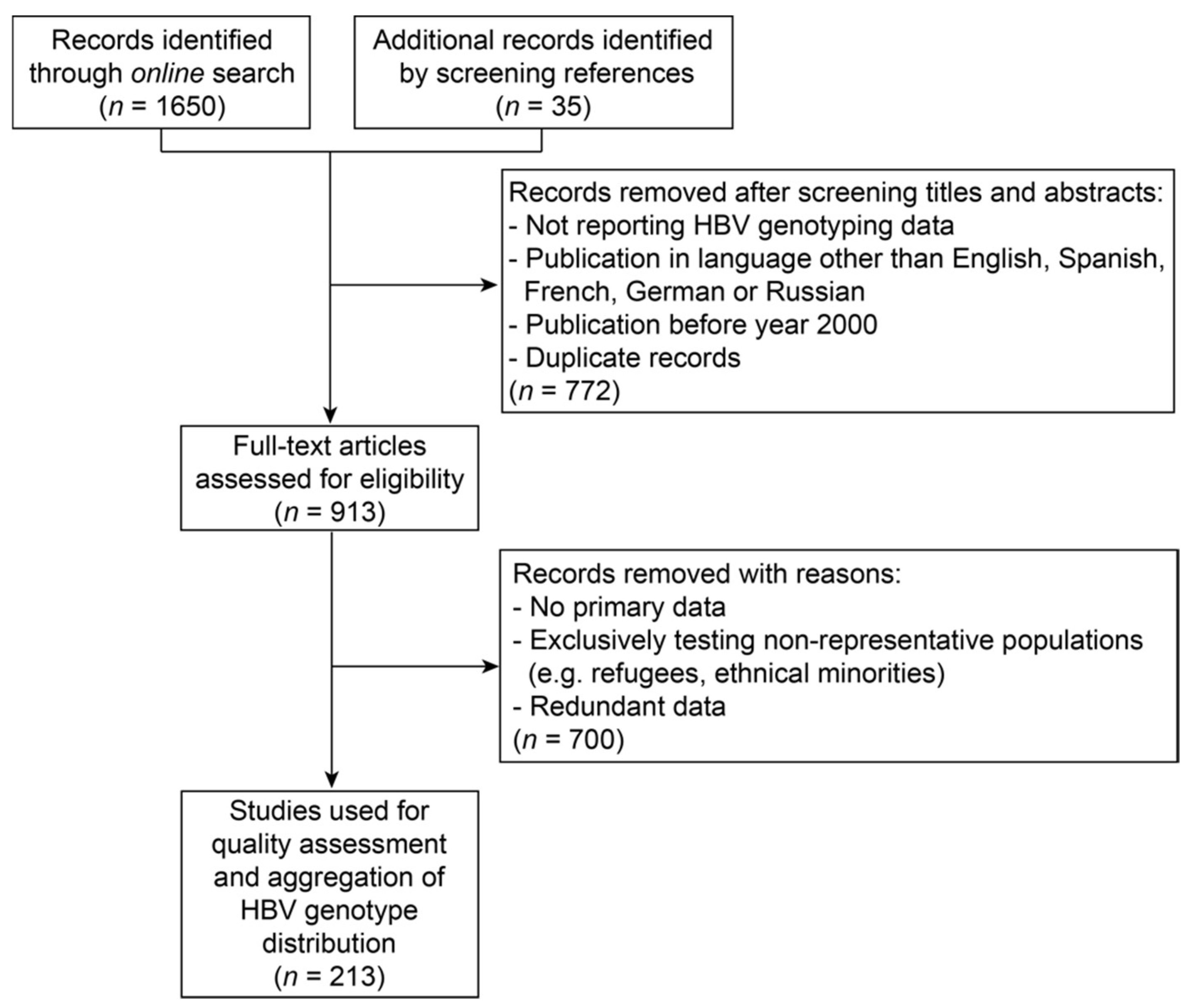 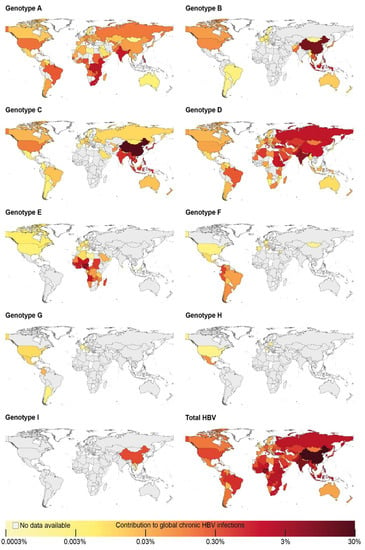 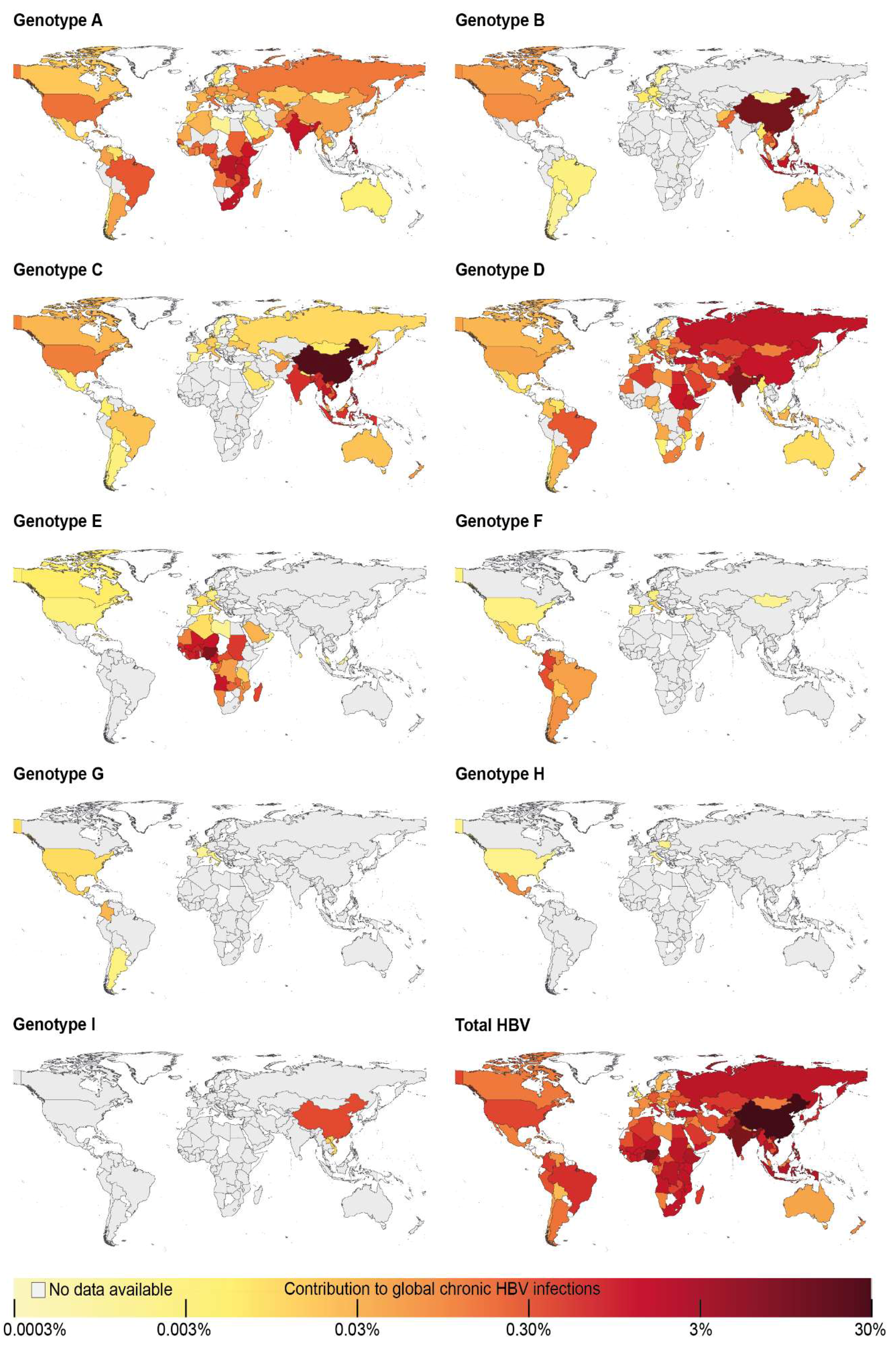