Various pathogens, such as M. pneumoniae, Streptococcus pneumoniae, and respiratory syncytial virus (RSV), are common infectious agents of pneumonia, which is one of the principal causes of childhood morbidity and mortality [1,2,3,4]. Generalized clinical detection of pathogens was primarily based on bronchoalveolar lavage fluid (BALF) sampling, which was confined to pneumonia with severe diseases [5] and easily contaminated by respiratory flora in upper respiratory tracts (URTs) [6]. In addition, culturing and nucleic acid detection of specific pathogens make it difficult to discern infection within the carriage [7,8,9], given the asymptomatically colonized pathogens.
Numerous reports demonstrated an imbalance of microbial flora in pneumonia patients who harbored lower diversity and richness of microbiota in URTs [2,5]. Moreover, this imbalanced respiratory microbiota pattern varied with infectious agents [10]. For instance, the Moraxella lacunata-dominated microbiota structure was identified in viral pneumonia [2], while the S. pneumoniae, Haemophilus influenzae complex or Moraxella catarrhalis dominated in the nasopharyngeal (NP) microbiota of bacterial pneumonia. Furthermore, the clustering of URTs microbiota in patients with pneumonia or bronchiolitis held the potential to predict disease severity, as a previous study demonstrated that the high relative abundance of either lactobacilli, Rothia or S. pneumoniae, was related to a high pneumonia severity index (PSI) [5].
Previous research indicated different NP and oropharyngeal (OP) microbiota between healthy and diseased children [11]. A two-year prospective study suggested that the transmission of imbalanced microbiota between the NP and OP of diseased children held the potential to further trigger lung infection [12]. Over the past few years, M. pneumoniae was a frequent cause of community-acquired pneumonia (CAP) and resulted in a high morbidity ratio in China [4]. In this study, we would like to answer two questions: (1) How does the NP and OP microbiota, and the microbiota transmission in URTs, of Chinese children with pneumonia differ from that of healthy children? (2) Are Mycoplasma pneumoniae pneumonia (MPP) and non-MPP infections associated with different NP and OP microbiota alterations?

This study was approved by the Ethical Committee of Shenzhen Children’s Hospital with registration number 2016013. All the guardians of recruited children provided their informed consent. All procedures performed in this study were in accordance with the ethical standards of the institutional and/or national research committee, as well as the 1964 Helsinki declaration and its later amendments or comparable ethical standards.

Pneumonia was diagnosed through characteristic chest radiographic abnormalities that were consistent with pneumonia (Table 1). Patients were selected based on following criteria: no asthma; no respiratory infection; and no exposure to antibiotics for 1 month before sampling. Age-matched, healthy children were recruited after physical examination in Shenzhen Children’s Hospital according to the following criteria: no asthma or family history of allergy; no history of pneumonia; no wheezing, fever, cough, or other respiratory/allergic symptoms at sampling 1 month prior to the study; no antibiotic exposure for 1 month before the study; no disease symptoms within 1-week after sampling. NP (25-800-A-50, Puritan, Guilford, NC, USA) and OP (155C, COPAN, Murrieta, CA, USA) swabs were collectively frozen at −80 °C within 10 min of sampling. Unused swabs and opened swabs, which were shook in the air for 10 s, were selected as negative controls.
Sputum was used for bacterial culturing, which was conducted to detect Acinetobacter baumannii, H. influenzae, Haemophilus parainfluenzae, M. catarrhalis, Staphylococcus aureus, Staphylococcus haemolyticus, and S. pneumoniae [13]. OP swabs were used to conduct nucleic acid testing (NAT). Adenovirus (AdV) and RSV were detected by a D3 Ultra DFA Respiratory Virus Screening & ID Kit (Diagnostic hybirds, Inc., Athens, OH, USA), while Epstein-bar virus (EBV), Cytomegalovirus (CMV), and Influenza A (H1N1) were detected by a EBV PCR Fluorescence quantitative diagnostic Kit, a Diagnostic Kit for Quantification of Human CMV DNA (PCR-fluorescence), and a Diagnostic kit for H1N1 RNA (PCR-fluorescence probing) (DaAnGene, Guangzhou, China, http://daan.joomcn.com/), respectively. M. pneumoniae and Chlamydia pneumoniae were diagnosed through a Diagnostic Kit for M. pneumoniae DNA (PCR-fluorescence probing) (DaAnGene, Guangzhou, China) and Anti C. pneumoniae ELISA (IgM) (EUROIMMUN AG, Lübeck, Germany). The Group A Streptococcus (GAS) detection was performed by Binax NOW® Strep A Card (Alere Scarborough, Inc., Scarborough, ME, USA).

Data filtration, taxonomic classification, and diversity calculation were conducted following our previous study [16]. PERMANOVA was applied to evaluate the confounding factors of microbiota composition and species-level classification of common pathogens referred to as the Live Tree Project (LTP) [17,18]. The inter-group comparison was conducted by the Wilcoxon rank-sum test, and the significance of multiple comparisons was adjusted by FDR. The distance between NP and OP microbiota was calculated by Bray-Curtis dissimilarity. The correlation of components with relative abundance—≥0.1% in microbiota—was assessed by Spearman’s rank correlation coefficient, with parameter coefficient ≥0.6 and p-value ≤0.05. Data visualization was produced by package ‘ggplot2’ of R software (v3.2.3) and Cytoscape (v3.4.0).

3.2. OP and NP Microbiota of Patients Differ Significantly from that of Healthy Children

3.3. NP and OP Microbiota Pattern of Inpatients Have an Increased Similarity to Each Other

3.4. Microbiota Analysis Can Be Complementary to Clinical Detection of Respiratory Pathogens

Our study shows a simpler NP and OP microbiota structure and co-occurrence network in children with pneumonia who were diagnosed with MPP or non-MPP. The level of respiratory commensals decreased after infection, such as a reduced number of lactic acid-producing bacterium Dolosigranulum [19]. A previous report also indicated decreased levels of Prevotella after a respiratory infection, which antagonized the LPS produced by H. influenzae and inhibited the Toll-like receptor 4 (TLR4) mediated mucosal inflammation [20]. Respiratory pathogens intrude greatly on the respiratory tract through multiple virulence factors [21,22,23,24] and evade the immune response of the host [25,26], which can induce a proliferation of pathogens and may explain the simpler NP and OP microbiota structure of patients [16,27,28].
In addition, we observe a higher similarity between NP and OP microbiota in patients, which can be explained by a robust intrusion of pathogens through the nasal cavity and the transmission from NP to OP and lung [29,30]. Microbes in the air are transmitted to the lung through the nasal cavity and NP [31], which affect the initial infection at NP and subsequent transmission. In parallel, we found OP-P enrichment of Corynebacterium, which was dominant in the NP microbiota of healthy children.
Compared to the non-MPP patients, MPP cases suffered a longer hospitalization time, a higher rate of abnormal CRP values, and fever. This may be related to the robust pathogenicity of M. pneumoniae, such as cytoadherence to respiratory epithelium and cytotoxicity release [32]. Meanwhile, the MPP group has a higher incidence of mixed infection with viruses or bacteria than non-MPP patients. The high ratio of mixed infection in our study is inconsistent with the previous report [33], which implied that the practice for CAP should be country- or region-specific.
Conventional pathogen detection is limited to known typical pathogens [34,35] and emerging reports demonstrating that the 16S/metagenomics method could assist in respiratory pathogen detection [36,37,38]. In a prior report, gram staining and culturing indicated that S. aureus and Streptococcus anginosus gave rise to infections in the lung, yet targeted therapy was not effective [37]. However, microbiota analysis showed that the patient had achieved significant remission from the Streptococcus intermedius infection after 14 days targeted therapy [37]. Several reports indicated the potential of metagenomic sequencing in diagnosing respiratory pathogens in ventilation associated pneumonia (VAP) and hematopoietic cellular transplant (HCT) patients [36,38]. This study shows that microbiota analysis is complementary to the present means of detecting M. pneumoniae, such as enrichment of other Mycoplasma species, for example, M. testudinis. In addition to Mycoplasma, 16S rDNA analysis also provides clues regarding other infectious pathogens affecting seven patients with a clinically unknown infection, including a >50% proportion of A. baumannii and Streptococcus peroris in the OP microbiota of P-38 and P-2, respectively.
Several limitations affecting this study should be noted. The first is the small number of recruited cases and lack of microbiota analysis in sputum/lung samples, which made it difficult to clearly comprehend the microbial transmission mode, as well as the significance of NP/OP microbiota analysis. Although the pneumonia samples were divided into MPP and non-MPP groups, we could not discover group-specific patterns to deepen our understanding of infection-related dysbiosis. The 16S rDNA analysis cannot identify species-level pathogens definitively, nor explain functional dysbiosis in infection-caused microbiota imbalance.

Y.Z. and S.L. managed the project. Z.L. and H.W. performed the sampling for all children and for the detection of common pathogens. Yan.L. and D.L. performed the bioinformatics analysis. Z.L. and W.D. interpreted the analysis results and wrote the paper. G.X. and Q.Z. prepared the DNA and optimized the graphs. Z.Y. and Yin.L. polished the article. All authors reviewed this manuscript.

The authors declare that no other organization or entity with a financial interest in, or financial conflict with, the subject matter or materials discussed in the manuscript, had any relevant affiliation or financial involvement, apart from those disclosed. 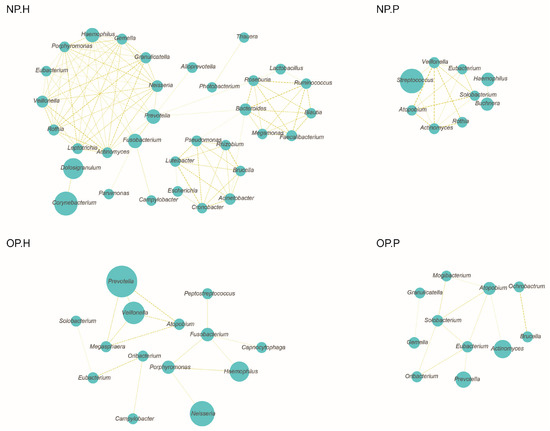 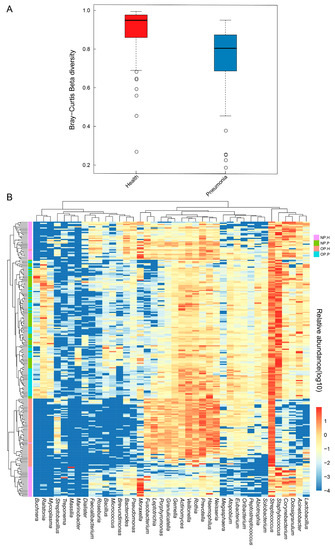 Table 1. Sample information.
Table 1. Sample information.
“-” represents no detected; “NA” represents not available; CRP, C-response protein; PCT, Procalcitonin.
© 2017 by the authors. Licensee MDPI, Basel, Switzerland. This article is an open access article distributed under the terms and conditions of the Creative Commons Attribution (CC BY) license (http://creativecommons.org/licenses/by/4.0/).
We use cookies on our website to ensure you get the best experience. Read more about our cookies here.
Accept
We have just recently launched a new version of our website. Help us to further improve by taking part in this short 5 minute survey here. here.
Never show this again