Context-Dependent Role of IKKβ in Cancer
Previous Article in Journal

TRIM8: Making the Right Decision between the Oncogene and Tumour Suppressor Role

The TRIM8/GERP protein is a member of the TRIM family defined by the presence of a common domain structure composed of a tripartite motif including a RING-finger, one or two B-box domains, and a coiled-coil motif. The TRIM8 gene maps on chromosome 10 within a region frequently found deleted and rearranged in tumours and transcribes a 3.0-kB mRNA. Its expression is mostly ubiquitously in murine and human tissues, and in epithelial and lymphoid cells, it can be induced by IFNγ. The protein spans 551 aa and is highly conserved during evolution. TRIM8 plays divergent roles in many biological processes, including important functions in inflammation and cancer through regulating various signalling pathways. In regulating cell growth, TRIM8 exerts either a tumour suppressor action, playing a prominent role in regulating p53 tumour suppressor activity, or an oncogene function, through the positive regulation of the NF-κB pathway. The molecular mechanisms underlying this dual role in human cancer will be discussed in depth in this review, and it will highlight the challenge and importance of developing novel therapeutic strategies specifically aimed at blocking the pro-oncogenic arm of the TRIM8 signalling pathway without affecting its tumour suppressive effects. View Full-Text
Keywords: TRIM8; tumour suppressor; oncogene; stemness; innate immunity; p53; NF-κB TRIM8; tumour suppressor; oncogene; stemness; innate immunity; p53; NF-κB
►▼ Show Figures 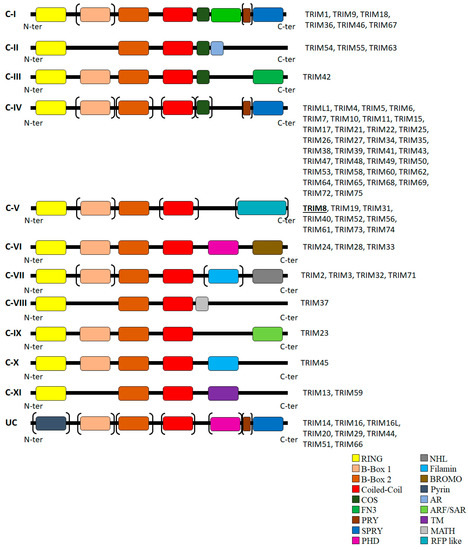