In the Gram‐positive pathogenic bacterium Staphylococcus aureus, the SaeRS twocomponent system (TCS) plays a major role in controlling the production of over 20 virulence factors including hemolysins, leukocidins, superantigens, surface proteins, and proteases. The SaeRS TCS is composed of the sensor histidine kinase SaeS, response regulator SaeR, and two auxiliary proteins SaeP and SaeQ. Since its discovery in 1994, the sae locus has been studied extensively, and its contributions to staphylococcal virulence and pathogenesis have been well documented and understood; however, the molecular mechanism by which the SaeRS TCS receives and processes cognate signals is not. In this article, therefore, we review the literature focusing on the signaling mechanism and its interaction with other global regulators. View Full-Text
Keywords: Staphylococcus aureus; Two‐component system; Virulence factors; Bacterial histidine  kinase Staphylococcus aureus; Two‐component system; Virulence factors; Bacterial histidine  kinase
►▼ Show Figures 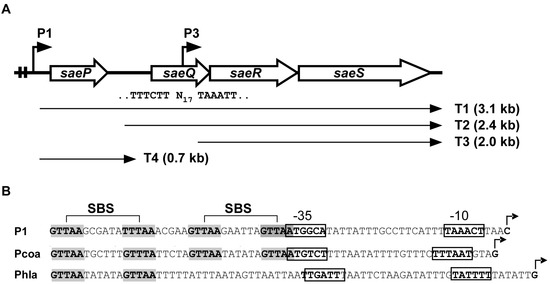