Radiobiology and Reproduction—What Can We Learn from Mammalian Females?

Ionizing radiation damages DNA and induces mutations as well as chromosomal reorganizations. Although radiotherapy increases survival among cancer patients, this treatment does not come without secondary effects, among which the most problematic is gonadal dysfunction, especially in women. Even more, if radio-induced DNA damage occurs in germ cells during spermatogenesis and/or oogenesis, they can produce chromosomal reorganizations associated with meiosis malfunction, abortions, as well as hereditary effects. However, most of our current knowledge of ionizing radiation genotoxic effects is derived from in vitro studies performed in somatic cells and there are only some experimental data that shed light on how germ cells work when affected by DNA alterations produced by ionizing radiation. In addition, these few data are often related to mammalian males, making it difficult to extrapolate the results to females. Here, we review the current knowledge of radiobiology and reproduction, paying attention to mammalian females. In order to do that, we will navigate across the female meiotic/reproductive cycle/life taking into account the radiation-induced genotoxic effects analysis and animal models used, published in recent decades. View Full-Text
Keywords: meiosis; oocytes; fertility; ionizing irradiation effects; radiation-sensitivity; DSBs; genome instability meiosis; oocytes; fertility; ionizing irradiation effects; radiation-sensitivity; DSBs; genome instability
►▼ Show Figures 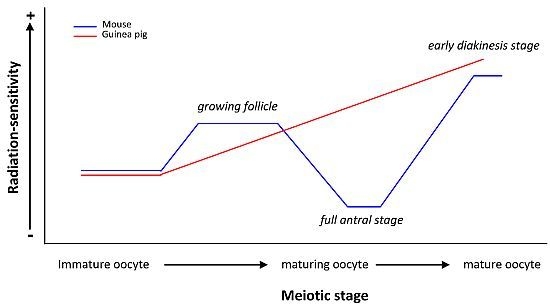