Adolescent Verbal Memory as a Psychosis Endophenotype: A Genome-Wide Association Study in an Ancestrally Diverse Sample

Schizophrenia is a heterogeneous and severe psychotic disorder. Epidemiological findings have suggested that the exposure to infectious agents such as Toxoplasma gondii (T. gondii) is associated with an increased risk for schizophrenia. On the other hand, there is evidence involving the catechol-O-methyltransferase (COMT) Val105/158Met polymorphism in the aetiology of schizophrenia since it alters the dopamine metabolism. A case–control study of 141 patients and 142 controls was conducted to analyse the polymorphism, the prevalence of anti-T. gondii IgG, and their interaction on the risk for schizophrenia. IgG were detected by ELISA, and genotyping was performed with TaqMan Real-Time PCR. Although no association was found between any COMT genotype and schizophrenia, we found a significant association between T. gondii seropositivity and the disorder (χ2 = 11.71; p-value < 0.001). Furthermore, the risk for schizophrenia conferred by T. gondii was modified by the COMT genotype, with those who had been exposed to the infection showing a different risk compared to that of nonexposed ones depending on the COMT genotype (χ2 for the interaction = 7.28, p-value = 0.007). This study provides evidence that the COMT genotype modifies the risk for schizophrenia conferred by T. gondii infection, with it being higher in those individuals with the Met/Met phenotype, intermediate in heterozygous, and lower in those with the Val/Val phenotype. View Full-Text
Keywords: COMT; Toxoplasma gondii; gene–environment interaction; schizophrenia; infectious agents; case–control study COMT; Toxoplasma gondii; gene–environment interaction; schizophrenia; infectious agents; case–control study
►▼ Show Figures 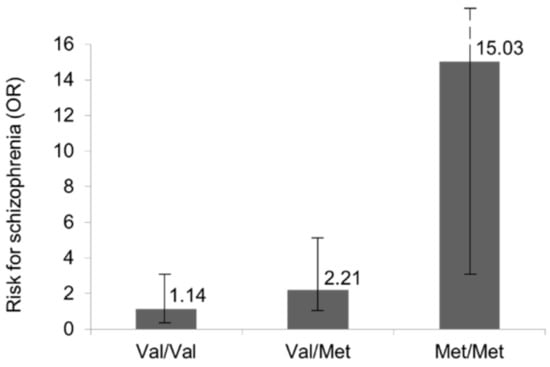