In Silico Analysis of Seven PCR Markers Developed from the CHD1, NIPBL and SPIN Genes Followed by Laboratory Testing Shows How to Reliably Determine the Sex of Musophagiformes Species

Triosteum himalayanum, Triosteum pinnatifidum (Triosteum L., Caprifoliaceae, Dipsacales) are widely distributed in China while Triosteum sinuatum mainly occurrs in northeast China. Few reports have been determined on the genus Triosteum. In the present research, we sequenced 2 chloroplast genomes of Triosteum and analyzed 18 chloroplast genomes, trying to explore the sequence variations and phylogeny of genus Triosteum in the order Dipsacales. The chloroplast genomes of the genus Triosteum ranged from 154,579 bp to 157,178 bp, consisting of 132 genes (86 protein-coding genes, 38 transfer RNA genes, and 8 ribosomal RNA genes). Comparative analyses and phylogenetic analysis supported the division of Dipsacales into two clades, Adoxaceae and six other families. Among the six families, a clade of Valerianaceae+Dipsacaceae was recovered as a sister to a clade of Morinaceae+Linnaeaceae. A closer relationship of T. himalayanum and T. pinnatifidum among three species was revealed. Our research supported that Loniceraferdinandi and Triosteum was closely related. Zabelia had a closer relationship with Linnaea borealis and Dipelta than Morinaceae. The divergence between T. sinuatum and two other species in Triosteum was dated to 13.4 mya. View Full-Text
Keywords: Triosteum L.; chloroplast genome; Dipsacales; phylogeny Triosteum L.; chloroplast genome; Dipsacales; phylogeny
►▼ Show Figures 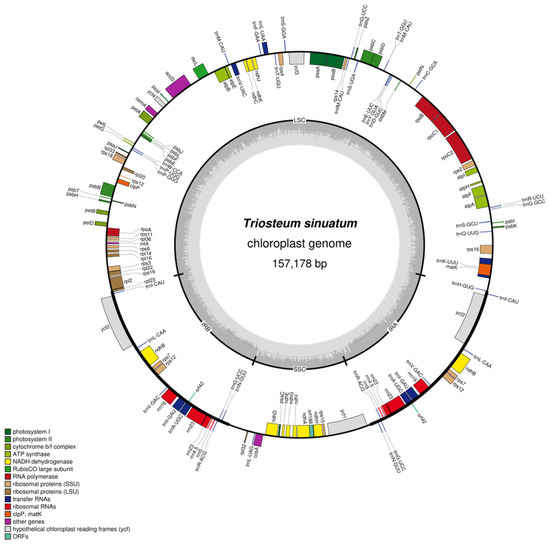