A Meta-Analytical Investigation of the Gap between Measured and Predicted Inter-Population Genetic Diversity in Species of High Conservation Concern—The Case of the Critically Endangered European Mink Mustela lutreola L., 1761
Previous Article in Journal

A Novel Splicing Variant of COL2A1 in a Fetus with Achondrogenesis Type II: Interpretation of Pathogenicity of In-Frame Deletions
Previous Article in Special Issue

Chronic wasting disease (CWD) is a fatal transmissible spongiform encephalopathy (TSE) of cervids caused by a misfolded variant of the normal cellular prion protein, and it is closely related to sheep scrapie. Variations in a host’s prion gene, PRNP, and its primary protein structure dramatically affect susceptibility to specific prion disorders, and breeding for PRNP variants that prevent scrapie infection has led to steep declines in the disease in North American and European sheep. While resistant alleles have been identified in cervids, a PRNP variant that completely prevents CWD has not yet been identified. Thus, control of the disease in farmed herds traditionally relies on quarantine and depopulation. In CWD-endemic areas, depopulation of private herds becomes challenging to justify, leading to opportunities to manage the disease in situ. We developed a selective breeding program for farmed white-tailed deer in a high-prevalence CWD-endemic area which focused on reducing frequencies of highly susceptible PRNP variants and introducing animals with less susceptible variants. With the use of newly developed primers, we found that breeding followed predictable Mendelian inheritance, and early data support our project’s utility in reducing CWD prevalence. This project represents a novel approach to CWD management, with future efforts building on these findings. View Full-Text
Keywords: prion; deer; PRNP; selective breeding; resistance; susceptibility; CWD prion; deer; PRNP; selective breeding; resistance; susceptibility; CWD
►▼ Show Figures 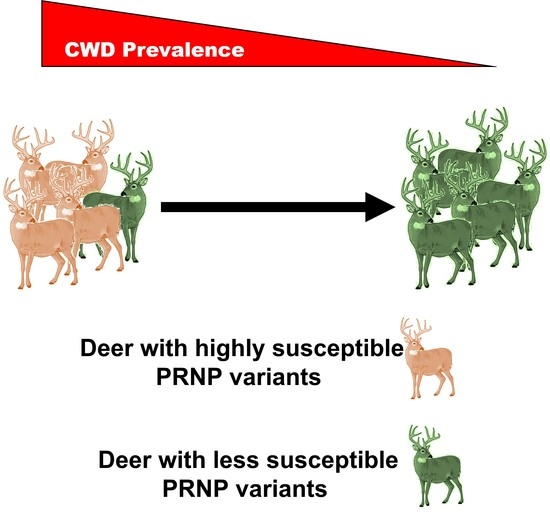