The Phenotypic Spectrum of 15q13.3 Region Duplications: Report of 5 Patients

After its publication in 1999 as a DNA-binding and SMAD-binding transcription factor (TF) that co-determines cell fate in amphibian embryos, ZEB2 was from 2003 studied by embryologists mainly by documenting the consequences of conditional, cell-type specific Zeb2 knockout (cKO) in mice. In between, it was further identified as causal gene causing Mowat-Wilson Syndrome (MOWS) and novel regulator of epithelial–mesenchymal transition (EMT). ZEB2’s functions and action mechanisms in mouse embryos were first addressed in its main sites of expression, with focus on those that helped to explain neurodevelopmental and neural crest defects seen in MOWS patients. By doing so, ZEB2 was identified in the forebrain as the first TF that determined timing of neuro-/gliogenesis, and thereby also the extent of different layers of the cortex, in a cell non-autonomous fashion, i.e., by its cell-intrinsic control within neurons of neuron-to-progenitor paracrine signaling. Transcriptomics-based phenotyping of Zeb2 mutant mouse cells have identified large sets of intact-ZEB2 dependent genes, and the cKO approaches also moved to post-natal brain development and diverse other systems in adult mice, including hematopoiesis and various cell types of the immune system. These new studies start to highlight the important adult roles of ZEB2 in cell–cell communication, including after challenge, e.g., in the infarcted heart and fibrotic liver. Such studies may further evolve towards those documenting the roles of ZEB2 in cell-based repair of injured tissue and organs, downstream of actions of diverse growth factors, which recapitulate developmental signaling principles in the injured sites. Evident questions are about ZEB2’s direct target genes, its various partners, and ZEB2 as a candidate modifier gene, e.g., in other (neuro)developmental disorders, but also the accurate transcriptional and epigenetic regulation of its mRNA expression sites and levels. Other questions start to address ZEB2’s function as a niche-controlling regulatory TF of also other cell types, in part by its modulation of growth factor responses (e.g., TGFβ/BMP, Wnt, Notch). Furthermore, growing numbers of mapped missense as well as protein non-coding mutations in MOWS patients are becoming available and inspire the design of new animal model and pluripotent stem cell-based systems. This review attempts to summarize in detail, albeit without discussing ZEB2’s role in cancer, hematopoiesis, and its emerging roles in the immune system, how intense ZEB2 research has arrived at this exciting intersection. View Full-Text
Keywords: ZEB2; Mowat-Wilson Syndrome; neurodevelopment; intellectual disability; neural crest cells ZEB2; Mowat-Wilson Syndrome; neurodevelopment; intellectual disability; neural crest cells
►▼ Show Figures 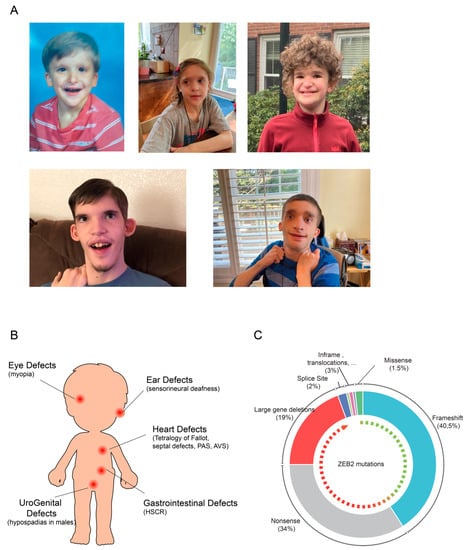