Parkinson’s disease (PD) is a neurodegenerative condition with heterogeneous clinical patterns and progression [1,2]. Despite the cause of PD still not being fully understood, a comprehensive mendelian randomization (MR) study described the relative risk of developing PD for 12 different exposures [3]. Furthermore, the role of inflammation in PD, either by local or systemic causes, has been consistently studied [4].
A newly examined inflammatory cause associated with PD was periodontitis [5]. Periodontitis is a chronic inflammatory disease of the gums with worldwide impact [6]. This condition represents the local manifestation of a developing immuno-physiological disruption, results in alveolar bone loss, and can cause tooth loss [7]. The evidence for an association between PD and periodontitis is still scarce, though the two latest studies have reported that the progression of PD (through motor and non-motor deterioration) may frustrate oral hygiene and oral health [8,9]. Moreover, individuals with PD have a high risk of developing periodontitis [10,11,12,13,14], and, if periodontitis is developed, this may lead to systemic leukocytosis [5]; however, its consequences are still unknown.
The causal relation concerning periodontitis and PD risk is limited in terms of evidence, with only observational studies available. To overcome the limitations of observational trials, including the lack of randomization, Mendelian randomization (MR) might be considered via summary data from genome-wide association studies (GWAS) for causality assessment in putative exposure–outcome pathways.
MR makes use of genetic variants in the form of instrumental variables (IVs) for the exposure of interest [15]. These IVs might be exploited to reckon the exposures’ causal effect if they meet three main assumptions: (1) strongly linked with the exposure; (2) independency from the confounding factors of the observed relationship; and (3) only the exposure permits association with the outcome (absence of horizontal pleiotropy) [15,16,17]. In addition, GWAS are increasing, fostering opportunities for MR approaches. For these reasons, this study investigated whether periodontitis and PD have a causal association in European ancestry populations using a MR approach.

2.1. MR of Periodontitis on Risk of PD

Periodontitis data were obtained from two meta-analyses of GWAS of periodontitis. The first was sourced from a Teumer et al. [18] review of 4032 individuals (1817 periodontitis cases vs. 2215 controls) of European ancestry. Seventeen single-nucleotide polymorphisms (SNPs) were proposed as being strongly related with periodontitis based on a significant p-value (<5 × 10−6 threshold) and were used as IVs. The second, from Munz et al. [19], served as a validation set, where eight SNPs (non-overlapping with the aforementioned seventeen SNPs) were deemed to be linked with periodontitis in 12,225 individuals with European ancestry (4924 periodontitis cases vs. 7301 controls). For both studies, summary statistics are available in Supplementary File S1.
The study by Shungin et al. [20], despite being the largest GWAS study on periodontitis, was deemed unsuitable because it is a compilation of data including the UK Biobank, therefore failing the principle of independency from the confounding factors.
If linkage disequilibrium was observed among the IVs, then they were pruned using clumping R2 (with a 0.001 cut-off) and the IVs expressing the lowest p-value were retained.
Outcome summary statistics of PD were derived from one newest GWAS study by Nalls et al. (37,688 cases and 1.4 million controls) [21], in which the magnitude of effects for each IV was obtained. The study by Nalls et al. [21] is, to this point, one of the largest GWAS of PD with European ancestry and of open access using data from the UK Biobank.

2.2. MR of PD on Risk of Periodontitis

PD data were derived from one GWAS by Chang et al. [22] (20,184 cases and 397,324 controls) with respective summary statistics (Supplementary File S2). Forty-five SNPs were linked towards the risk of PD with a significance of <5 × 10−8. Statistics for all IVs were accessible in the genome studies of periodontitis, and were integrated in this analysis. The outcome summary statistics of periodontitis were sourced from the Offenbacher et al. [23] GWAS study (975 European American adult participants).

Our analyses were carried out using R (version 3.6.1), through MRPRESSO (1.0) and TwoSampleMR (0.4.25) packages.
The presence of horizontal pleiotropic outliers was inspected using MR-PRESSO R package (pleiotropy residual sum and outlier) [24]. Next, we computed Pseudo R2 (proportion of variance of exposure liability explained by SNPs) and F-statistic to estimate the strength of the instruments, whenever effect allele frequency (EAF) values were present.
TwoSampleMR was run for selected SNPs’ individual lookup requests against multiple target GWAS, harmonization of effect allele across studies, linkage disequilibrium (LD) pruning, and sensitivity analyses. The option to use adequate proxy SNPs to replace exposure SNPs absent from the outcome dataset was enabled.
The causality in both conditions was tested throughout the following MR effect estimation methods: inverse-variance weighted (IVW) method (random effects) [16], weighted median [17], and MR-Egger [25], with the latter two being considered relatively robust to horizontal pleiotropy. Furthermore, we also estimated the causal effect through the MR-RAPS (robust adjusted profile score) method, due to its robustness towards weak instrument bias [26]. Horizontal pleiotropy was examined by computing the MR-Egger regression line (intercept and 95% confidence interval [CI]) [25].
The Cochran’s Q verified the heterogeneity value among the causal estimates of each SNPs for both the IVW and MR-Egger approaches. To determine if the effect was not being caused by a particular SNP in a disproportional way, we performed leave-one-out meta-analyses. MR estimates are reported as coefficient (B) and standard error (SE). Forest plots are reported as B and the 95% confidence interval. The computation of MR estimates has previously demonstrated to be proficient in the detection of a causal outcome rather than the extent of the causative effect [15].
All original clinical studies had ethical clearance from the respective Institutional Review Boards [18,19,22].

To the best of our knowledge, this is the first study employing a two-sample MR method to explore a causal association between PD and periodontitis in a bidirectional way, in European ancestry populations. Overall, our results do not support a bidirectional genetic liability between these two conditions. However, these results should be interpreted with caution given the scarcity of GWAS studies available so far on these two diseases.
Neurological conditions have been associated with periodontitis, such as Alzheimer’s Disease, dementia, or PD [5,9,28,29]. From a biological standpoint, the association of periodontitis with these intricate illnesses may be based on the influence of systemic inflammation and the systemic spreading of periodontal pathogens products with potential affection of brain tissues [30,31]. These processes might support the reported association of Porphyromonas gingivalis IgG levels with compromised delayed memory and calculation [32]. Remarkably, a preclinical study in mice showed that continuous oral application of Porphyromonas gingivalis caused neurodegeneration and formation of extracellular Aβ42 [33]. The potential impact of leukocytosis found in PD patients with periodontitis is still uncertain, as persistent elevated levels of white blood cells were linked to cardiovascular or diabetic related negative events [34,35,36].
This MR study presents a comprehensive analysis from large and fashionable datasets. Nevertheless, there are a number of potential limitations to discuss. MR computation is powerless to elucidate if the existence of one illness in a particular period of lifetime can influence the risk of developing another illness. In addition, when there is a strong genetic/environmental interaction present (as might be the case in periodontitis), MR may lead to an inaccurate conclusion. Furthermore, this analysis was based on European ancestry studies due to the scarcity of GWAS studies in other populations, therefore limiting the generalizability of these results.
The instruments used in periodontitis showed weak association with PD, since the p-value was higher than the ideal. In addition, the lack of overlapping instruments between the two genome studies of periodontitis may denote weak IVs. Furthermore, we highlight that the biological mechanisms on how these SNPs impact periodontitis are still imprecise.
The instruments for periodontitis presented weak association, as the p-values were 5 × 10−6 (lower than 5 × 10−8). Additionally, both GWAS studies did not present overlapping SNPs, which further denotes weak instruments for periodontitis. Likewise, of all SNPs included in the analysis, its biological relation with periodontitis and how they biologically act in this condition is still far from being understood.
Importantly, GWAS studies on periodontitis are prone to fail in the identification of consistent SNPs [18,19,20,37,38] because of the inconsistent definitions of periodontitis that are being used in different studies. Hence, studies shall employ up-to-date definitions of periodontitis following the American Academy of Periodontology/European Federation of Periodontology case definition [39], considering its variability [40].
Further MR studies using summary statistics from GWAS datasets of α synuclein and LRRK2 may explore the potential biological pathways between periodontitis and the risk towards PD.

In this bidirectional MR study, we found no convincing evidence supporting a bidirectional genetic liability between periodontitis and PD. Further GWAS research is warranted to explore the consistency of these results further.

Funding: This work is financed by national funds through the FCT—Foundation for Science and Technology, I.P., under the project UIDB/04585/2020.

Data will be provided upon reasonable request from the corresponding author. 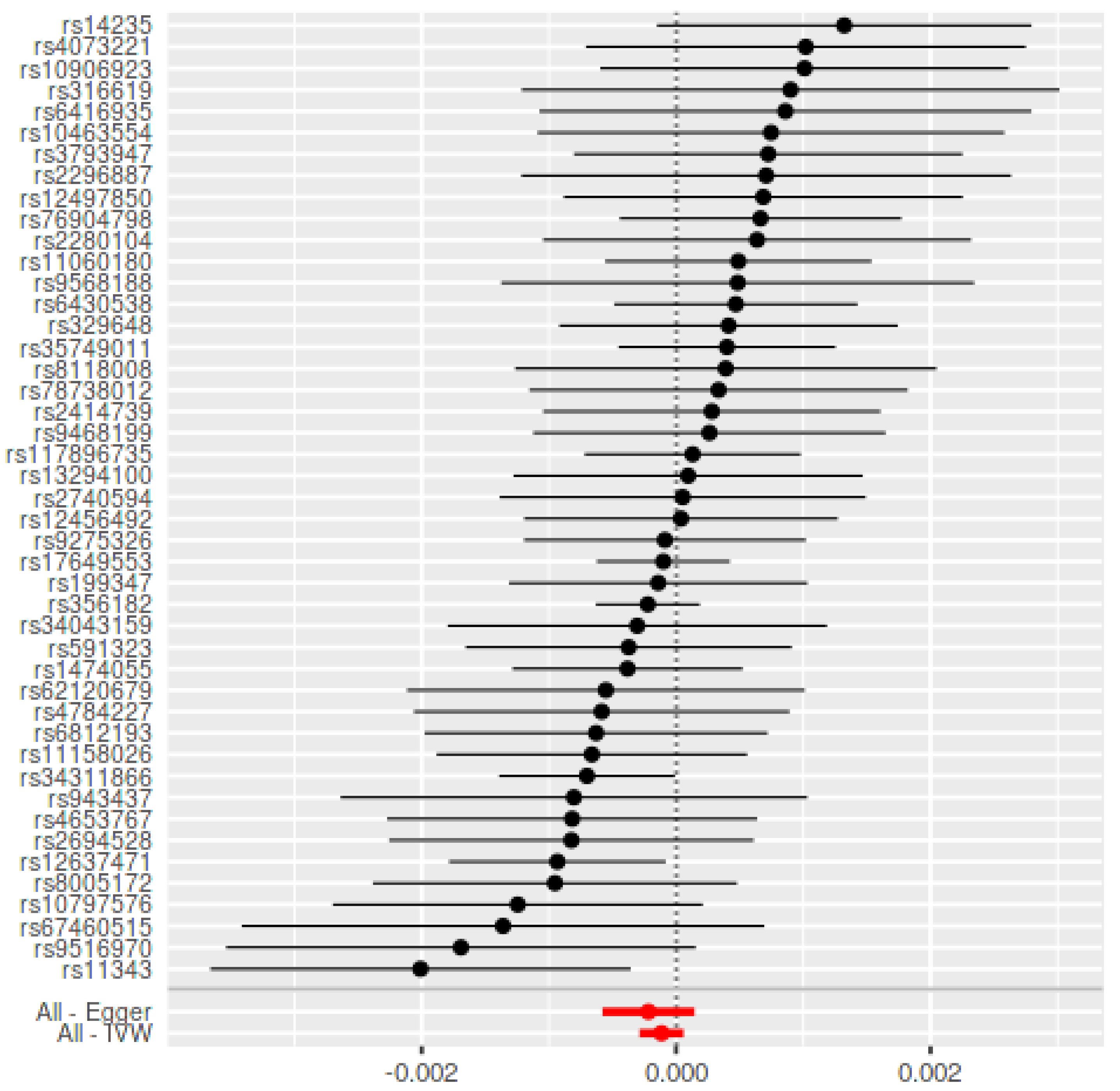