Genome Analysis of Endotrypanum and Porcisia spp., Closest Phylogenetic Relatives of Leishmania, Highlights the Role of Amastins in Shaping Pathogenicity

While numerous genomes of Leishmania spp. have been sequenced and analyzed, an understanding of the evolutionary history of these organisms remains limited due to the unavailability of the sequence data for their closest known relatives, Endotrypanum and Porcisia spp., infecting sloths and porcupines. We have sequenced and analyzed genomes of three members of this clade in order to fill this gap. Their comparative analyses revealed only minute differences from Leishmaniamajor genome in terms of metabolic capacities. We also documented that the number of genes under positive selection on the Endotrypanum/Porcisia branch is rather small, with the flagellum-related group of genes being over-represented. Most significantly, the analysis of gene family evolution revealed a substantially reduced repertoire of surface proteins, such as amastins and biopterin transporters BT1 in the Endotrypanum/Porcisia species when compared to amastigote-dwelling Leishmania. This reduction was especially pronounced for δ-amastins, a subfamily of cell surface proteins crucial in the propagation of Leishmania amastigotes inside vertebrate macrophages and, apparently, dispensable for Endotrypanum/Porcisia, which do not infect such cells. View Full-Text
Keywords: leishmaniinae; genome analysis; gene gain; gene loss leishmaniinae; genome analysis; gene gain; gene loss
►▼ Show Figures 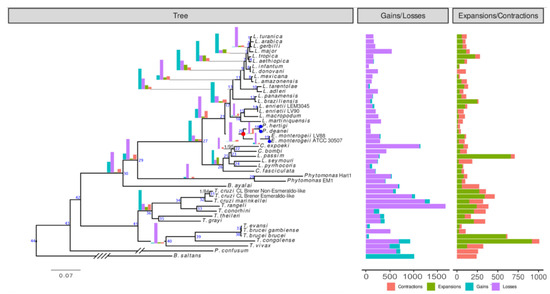