Hybridogenesis in the Water Frogs from Western Russian Territory: Intrapopulation Variation in Genome Elimination
Next Article in Special Issue

Trichomes are a common morphological defense against pests, in particular, type IV glandular trichomes have been associated with resistance against different invertebrates. Cultivated tomatoes usually lack or have a very low density of type IV trichomes. Therefore, for sustainable management of this crop, breeding programs could incorporate some natural defense mechanisms, such as those afforded by trichomes, present in certain Solanum species. We have identified a S. pimpinellifolium accession with very high density of this type of trichomes. This accession was crossed with a S. lycopersicum var. cerasiforme and a S. lycopersicum var. lycopersicum accessions, and the two resulting F2 populations have been characterized and genotyped using a new genotyping methodology, K-seq. We have been able to build an ultra-dense genetic map with 147,326 SNP markers with an average distance between markers of 0.2 cm that has allowed us to perform a detailed mapping. We have used two different families and two different approaches, QTL mapping and QTL-seq, to identify several QTLs implicated in the control of trichome type IV developed in this accession on the chromosomes 5, 6, 9 and 11. The QTL located on chromosome 9 is a major QTL that has not been previously reported in S. pimpinellifolium. This QTL could be easily introgressed in cultivated tomato due to the close genetic relationship between both species. View Full-Text
Keywords: trichomes type IV; trichomes; tomato; QTL; K-seq; Solanum pimpinellifolium trichomes type IV; trichomes; tomato; QTL; K-seq; Solanum pimpinellifolium
►▼ Show Figures 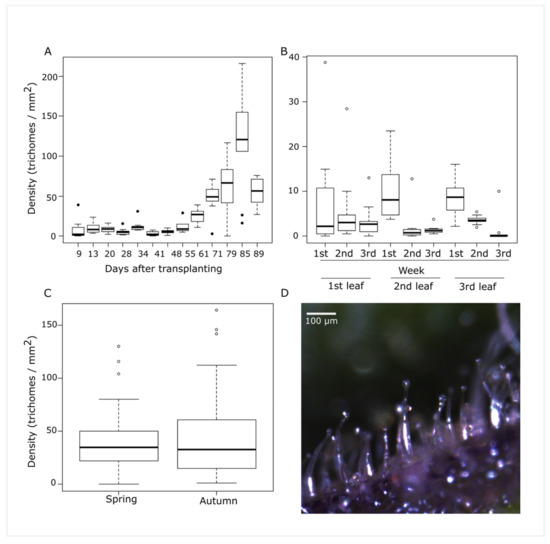