Development of a Quantitative FMRP Assay for Mouse Tissue Applications

Meiosis in Polyploids and Implications for Genetic Mapping: A Review

Plant cytogenetic studies have provided essential knowledge on chromosome behavior during meiosis, contributing to our understanding of this complex process. In this review, we describe in detail the meiotic process in auto- and allopolyploids from the onset of prophase I through pairing, recombination, and bivalent formation, highlighting recent findings on the genetic control and mode of action of specific proteins that lead to diploid-like meiosis behavior in polyploid species. During the meiosis of newly formed polyploids, related chromosomes (homologous in autopolyploids; homologous and homoeologous in allopolyploids) can combine in complex structures called multivalents. These structures occur when multiple chromosomes simultaneously pair, synapse, and recombine. We discuss the effectiveness of crossover frequency in preventing multivalent formation and favoring regular meiosis. Homoeologous recombination in particular can generate new gene (locus) combinations and phenotypes, but it may destabilize the karyotype and lead to aberrant meiotic behavior, reducing fertility. In crop species, understanding the factors that control pairing and recombination has the potential to provide plant breeders with resources to make fuller use of available chromosome variations in number and structure. We focused on wheat and oilseed rape, since there is an abundance of elucidating studies on this subject, including the molecular characterization of the Ph1 (wheat) and PrBn (oilseed rape) loci, which are known to play a crucial role in regulating meiosis. Finally, we exploited the consequences of chromosome pairing and recombination for genetic map construction in polyploids, highlighting two case studies of complex genomes: (i) modern sugarcane, which has a man-made genome harboring two subgenomes with some recombinant chromosomes; and (ii) hexaploid sweet potato, a naturally occurring polyploid. The recent inclusion of allelic dosage information has improved linkage estimation in polyploids, allowing multilocus genetic maps to be constructed. View Full-Text
Keywords: auto- and allopolyploids; meiosis; early meiosis; genetic control; homoeologous recombination; genetic maps; allelic dosage; multilocus linkage auto- and allopolyploids; meiosis; early meiosis; genetic control; homoeologous recombination; genetic maps; allelic dosage; multilocus linkage
►▼ Show Figures 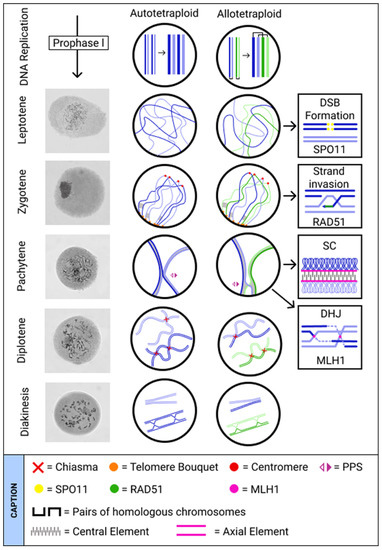