The taxonomy and phylogenetics of Neotropical deer have been mostly based on morphological criteria and needs a critical revision on the basis of new molecular and cytogenetic markers. In this study, we used the variation in the sequence, copy number, and chromosome localization of satellite I-IV DNA to evaluate evolutionary relationships among eight Neotropical deer species. Using FISH with satI-IV probes derived from Mazama gouazoubira, we proved the presence of satellite DNA blocks in peri/centromeric regions of all analyzed deer. Satellite DNA was also detected in the interstitial chromosome regions of species of the genus Mazama with highly reduced chromosome numbers. In contrast to Blastocerus dichotomus, Ozotoceros bezoarticus, and Odocoileus virginianus, Mazama species showed high abundance of satIV DNA by FISH. The phylogenetic analysis of the satellite DNA showed close relationships between O. bezoarticus and B. dichotomus. Furthermore, the Neotropical and Nearctic populations of O. virginianus formed a single clade. However, the satellite DNA phylogeny did not allow resolving the relationships within the genus Mazama. The high abundance of the satellite DNA in centromeres probably contributes to the formation of chromosomal rearrangements, thus leading to a fast and ongoing speciation in this genus, which has not yet been reflected in the satellite DNA sequence diversification. View Full-Text
Keywords: Cervidae; comparative cytogenetics; FISH; satellite DNA; sequencing Cervidae; comparative cytogenetics; FISH; satellite DNA; sequencing
►▼ Show Figures 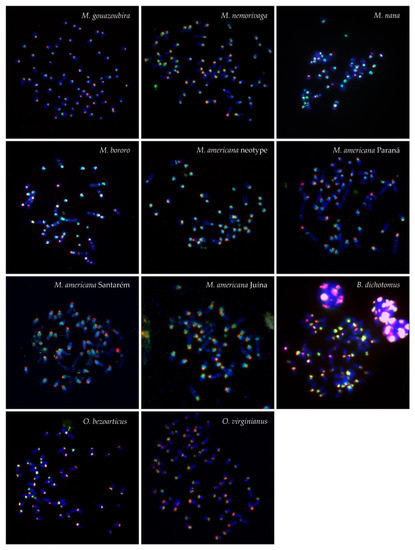