Bacteria are increasingly used for biotechnological applications such as bioremediation, biorecovery, bioproduction, and biosensing. The development of strains suited for such applications requires a thorough understanding of their behavior, with a key role for their transcriptomic landscape. We present a thorough analysis of the transcriptome of Cupriavidus metallidurans CH34 cells acutely exposed to copper by tagRNA-sequencing. C. metallidurans CH34 is a model organism for metal resistance, and its potential as a biosensor and candidate for metal bioremediation has been demonstrated in multiple studies. Several metabolic pathways were impacted by Cu exposure, and a broad spectrum of metal resistance mechanisms, not limited to copper-specific clusters, was overexpressed. In addition, several gene clusters involved in the oxidative stress response and the cysteine-sulfur metabolism were induced. In total, 7500 transcription start sites (TSSs) were annotated and classified with respect to their location relative to coding sequences (CDSs). Predicted TSSs were used to re-annotate 182 CDSs. The TSSs of 2422 CDSs were detected, and consensus promotor logos were derived. Interestingly, many leaderless messenger RNAs (mRNAs) were found. In addition, many mRNAs were transcribed from multiple alternative TSSs. We observed pervasive intragenic TSSs both in sense and antisense to CDSs. Antisense transcripts were enriched near the 5′ end of mRNAs, indicating a functional role in post-transcriptional regulation. In total, 578 TSSs were detected in intergenic regions, of which 35 were identified as putative small regulatory RNAs. Finally, we provide a detailed analysis of the main copper resistance clusters in CH34, which include many intragenic and antisense transcripts. These results clearly highlight the ubiquity of noncoding transcripts in the CH34 transcriptome, many of which are putatively involved in the regulation of metal resistance. View Full-Text
Keywords: copper; differential RNA-sequencing; Cupriavidus metallidurans; differential gene expression; transcription start site; gene regulation; sRNA copper; differential RNA-sequencing; Cupriavidus metallidurans; differential gene expression; transcription start site; gene regulation; sRNA
►▼ Show Figures 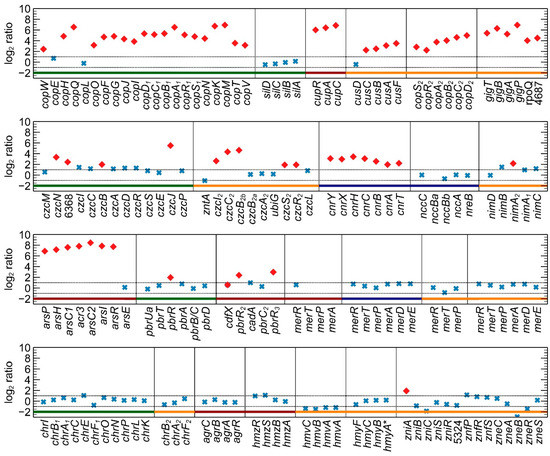