Analysis of ancient and historical DNA has great potential to trace the genetic diversity of local cattle populations during their centuries-long development. Forty-nine specimens representing five cattle breeds (Kholmogor, Yaroslavl, Great Russian, Novgorod, and Holland), dated from the end of the 19th century to the first half of the 20th century, were genotyped for nine polymorphic microsatellite loci. Using a multiple-tube approach, we determined the consensus genotypes of all samples/loci analysed. Amplification errors, including allelic drop-out (ADO) and false alleles (FA), occurred with an average frequency of 2.35% and 0.79%, respectively. A significant effect of allelic length on ADO rate (r2 = 0.620, p = 0.05) was shown. We did not observe significant differences in genetic diversity among historical samples and modern representatives of Kholmogor and Yaroslavl breeds. The unbiased expected heterozygosity values were 0.726–0.774 and 0.708–0.739; the allelic richness values were 2.716–2.893 and 2.661–2.758 for the historical and modern samples, respectively. Analyses of FST and Jost’s D genetic distances, and the results of STRUCTURE clustering, showed the maintenance of a part of historical components in the modern populations of Kholmogor and Yaroslavl cattle. Our study contributes to the conservation of biodiversity in the local Russian genetic resources of cattle. View Full-Text
Keywords: microsatellites; consensus genotypes; multiple-tube approach; historical DNA; Russian local cattle breeds; genetic diversity microsatellites; consensus genotypes; multiple-tube approach; historical DNA; Russian local cattle breeds; genetic diversity
►▼ Show Figures 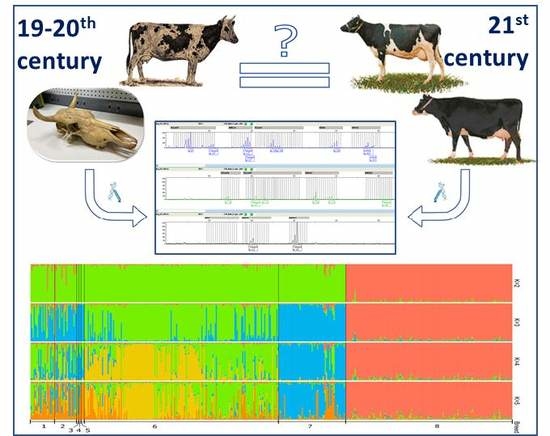