Multifaceted Roles of DNA Methylation in Neoplastic Transformation, from Tumor Suppressors to EMT and Metastasis
Previous Article in Special Issue

Cortical Granule Distribution and Expression Pattern of Genes Regulating Cellular Component Size, Morphogenesis, and Potential to Differentiation are Related to Oocyte Developmental Competence and Maturational Capacity In Vivo and In Vitro

Progesterone receptor (PGR) for its action required connection of the coregulatory proteins, including coactivators and corepressors. The former group exhibits a histone acetyltransferase (HAT) activity, while the latter cooperates with histone deacetylase (HDAC). Regulations of the coregulators mRNA and protein and HAT and HDAC activity can have an indirect effect on the PGR function and thus progesterone (P4) action on target cells. The highest mRNA expression levels for the coactivators—histone acetyltransferase p300 (P300), cAMP response element-binding protein (CREB), and steroid receptor coactivator-1 (SRC-1)—and nuclear receptor corepressor-2 (NCOR-2) were found in the corpus luteum (CL) on days 6 to 16 of the estrous cycle. The CREB protein level was higher on days 2–10, whereas SRC-1 and NCOR-2 were higher on days 2–5. The activity of HAT and HDAC was higher on days 6–10 of the estrous cycle. All of the coregulators were localized in the nuclei of small and large luteal cells. The mRNA and protein expression levels of the examined coactivators and corepressor changed with the P4 level. Thus, P4 may regulate CL function via the expression of coregulators, which probably affects the activity of the PGR.
Keywords: progesterone receptor coregulators; P300; CREB; SRC-1; NCOR-2; corpus luteum; cow progesterone receptor coregulators; P300; CREB; SRC-1; NCOR-2; corpus luteum; cow

Progesterone (P4) is a steroid hormone produced by the follicle, corpus luteum (CL), and placenta; it plays a crucial role in regulating the length of the estrous cycle, blastocyst implantation, and the maintenance of pregnancy in many species of mammals, including cows [1]. The genomic action of P4 is mediated by their specific nuclear receptors (PGRs). These receptors are ligand-regulated transcription factors activated by P4. The cellular response to P4 is mediated by two isoforms of the PGR: isoform A (PGRA) and isoform B (PGRB). Both isoforms are transcribed from the same gene under the influence of two different promoters [2]. They differ in their length—PGRB is longer than PGRA by approximately 164 nucleotides in humans; in other species, this difference is 128–165 amino acids [2]. Each isoform performs a different action. PGRB acts as a potent activator of genes that are dependent on P4, whereas PGRA is a weak activator of such genes [3].
The inactive form of the PGR receptor is present in the cytosol and connected to the heat shock protein (HSP) [4]. After the hormone binds to the receptor, these proteins dissociate, and PGR translocates to the cell nucleus. Here, it dimerizes and connects to the promoter region of the gene expressed. The last step in PGR activation is the connection of the receptor’s additional elements, which are called coregulators and modulate receptor action. This group of proteins interacts with the receptor complex without binding to the DNA of the target gene sequence [5]. Coregulators are divided into two groups of proteins: coactivators (proteins that enhance the transcription of target genes) and corepressors (proteins that inhibit the transcription of such genes) [6]. Coactivators have internal histone acetyltransferase (HAT) activity. By acetylating histone proteins, HAT loosens chromatin, which results in an increased expression of various genes [7]. In contrast, corepressors interact with histone deacetylases (HDACs), which deacetylate histone proteins, thereby increasing chromatin condensation and inhibiting the transcription of the target genes [8].
Both coactivators and corepressors may exhibit variable expression in the estrous cycle, as shown in the human endometrium [9], as well as the bovine endometrium and CL [10]. Therefore, changes in the mRNA and protein levels of coregulators, as well as HAT and HDAC activity, can affect the PGR function of the CL and the uterus, thereby regulating the action of P4 on target cells. Therefore, this study aims to evaluate cellular distribution and the levels of mRNA expression and protein for the coactivators—histone acetyltransferase p300 (P300), cAMP response element-binding protein (CREB), and steroid receptor coactivator-1 (SRC-1)—and the corepressor, nuclear receptor corepressor-2 (NCOR-2), in luteal cells during the estrous cycle in cows. We also determine the activity of HAT and HDAC in the CL during the estrous cycle.

Corpora lutea from non-gravid cows and mature heifers were harvested from a commercial slaughterhouse within 20 min of death. Tissues from the four stages of the estrous cycle (days 2–5, 6–10, 11–16, and 17–20) were frozen in liquid nitrogen, transported to the laboratory, and stored at −80 °C until further use. The days of the estrous cycle were determined by criteria reported by Ireland [11]. The CLs were transported to the laboratory in ice-cold phosphate-buffered saline (PBS) within 1 hour of death for the isolation of nuclear proteins for determination of HAT and HDAC activity. Corpus luteum sections for immunohistochemistry were fixed with 4% paraformaldehyde in 0.1 M PBS (pH 7.4) for 24 h and washed with distilled water, followed by dehydration in an ethanol gradient and embedding in paraffin. The deeply frozen tissues were homogenized with a Retsch MM–2 vibratory mill (Retsch GmbH, Haan, Germany). Individual portions of tissue powder were separated for the isolation of RNA and protein level determination. Nuclear proteins were isolated using a Nuclear/Cytosol Fractionation Kit (Biovision, Milpitas, CA, USA), according to the manufacturer’s instructions, and stored at −80 °C until further analysis.

We determined P4 concentrations by enzyme immunoassay (EIA), as previously reported by Prakash [12], using a reader plate (Multiscan EX, Labsystem, Helsinki, Finland) for the measurement at an absorbance of 450 nm. Progesterone was extracted from CL tissue using petroleum ether [13]. Recovery of this hormone averaged 90%; data were corrected for procedural losses. Progesterone labeled with horseradish peroxidase was used at a final dilution of 1:40,000. P4 antiserum (IFP4) was used at a final dilution of 1:60,000 and has been previously characterized by Kotwica [14]. The range of the standard curve was 0.1–25 ng/mL, and the sensitivity of the procedure was 0.15 ng/mL. The values of steroids shown on the graph were calculated per gram of CL tissue. Intra- and inter-assay coefficients of variation for the control samples were 6.2% and 7.7% on average, respectively. The relationship between the added and measured amounts of hormone (n = 5) was significant (r = 0.96).

For immunohistochemical localization, CL sections of 6 μm thickness from days 6–10 and 17–20 were cut from paraffin-embedded samples and mounted on Super Frost Plus microscope slides. The sections were deparaffinized in xylene and rehydrated in a series of ethanol dilutions (100%, 96%, 70%, H2O). Antigen retrieval was performed by pressure cooking in 0.01 M sodium citrate with 0.05% Tween 20 (pH 6.0). After blocking the endogenous peroxidase activity with BLOXALL Endogenous Peroxidase and Alkaline Phosphatase Blocking Solution (Vector Laboratories, Peterborough, UK) for 15 min, we incubated the sections with 2.5% normal horse serum (NHS) to block nonspecific binding sites (45 min at room temperature). Next, the sections were incubated overnight at 4 °C with primary antibodies for coactivators: P300 (1:70) (Cohesion Biosciences, London, UK), CREB (1:400) (Cohesion Biosciences, London, UK), SRC-1 (1:35) (Sigma, Poznan, Poland), and corepressor NCOR–2 (1:50) (Sigma, Poznan, Poland). For the negative control sections, primary antibodies were replaced with 2.5% normal horse serum (NHS). On the next day, the sections were washed in Tris-buffered saline (TBS) three times for 10 minutes and incubated with the ImmPRESS Reagent (Vector Laboratories, Peterborough, UK) at 4 °C for 30 min (this reagent contains the second antibody). After washing three times for 10 min in TBS, the sections were visualized with 3,3′-diaminobenzidine (DAB; Vector Laboratories, Peterborough, UK). Next, they were rinsed, counterstained with Mayer’s hematoxylin (1 min), dehydrated, covered with mounting medium (DPX; POCh, Gliwice, Poland), and then examined using a Zeiss Axio Imager Z1 microscope (Zeiss, Oberkochen, Germany).

Total RNA was isolated from homogenized tissue using a Universal RNA Purification Kit (EURx, Gdansk, Poland) according to the manufacturer’s instructions, based on the method described previously by Chomczynski and Sacchi [15]. Isolated RNA was stored at −80 °C until further analysis. The concentration and purity of the RNA were determined by measuring the absorbance at 260 nm and 280 nm wavelengths using a NanoDrop 1000 spectrophotometer (Thermo Scientific, Wilmington, DE, USA). DNase–treated RNA (1 μg) was reverse transcribed using the TRANSCRIPTME cDNA Synthesis Kit (Blirt, Gdansk, Poland) according to the manufacturer’s instructions.

Hormone concentration values, real-time PCR, and Western blots are presented as the mean ± SEM; they were compared by one-way analysis of variance (ANOVA) followed by the Tukey test. We analyzed the relative mRNA quantification data with the Real-time PCR Miner algorithm [17]. Data obtained from real-time PCR were normalized to TBP to obtain arbitrary units for the relative amount of the PCR product. Data obtained in Western blot were normalized to total protein in each lane using Stain-Free technology and chemiluminescent protein detection [16]. We performed all calculations using the Graph Pad Prism 8.0 software package (GraphPad Software, Inc., San Diego, CA, USA).

Positive immunostaining for coactivators P300, CREB, and SRC–1 and corepressor NCOR-2 in CL slices on days 6–10 of the estrous cycle was observed in the nuclei of small and large luteal cells. Negative control sections for all investigated proteins were consistently free of stain (Figure 1).

3.3. Expression of Coregulators mRNA in the CL

3.4. Protein Level of Coregulators in the CL

mRNA and protein levels for coregulators change with P4 levels, suggesting the role of this hormone in regulating their expression and activities. On the other hand, a similar level of expression between these coregulators and corepressors in the CL may indicate that their attachment to the PGR receptor possibly occurs in a competitive manner. These similar expression levels also form an element of homeostasis in the cell, balancing the expression and silencing of genes significant for cellular functioning.

This study was supported by the National Science Centre of Poland: UMO–2015/ 17/B/NZ4/02440 and by The Polish Academy of Sciences.

The authors declare that there are no conflicts of interest that would prejudice the impartiality of this scientific work. 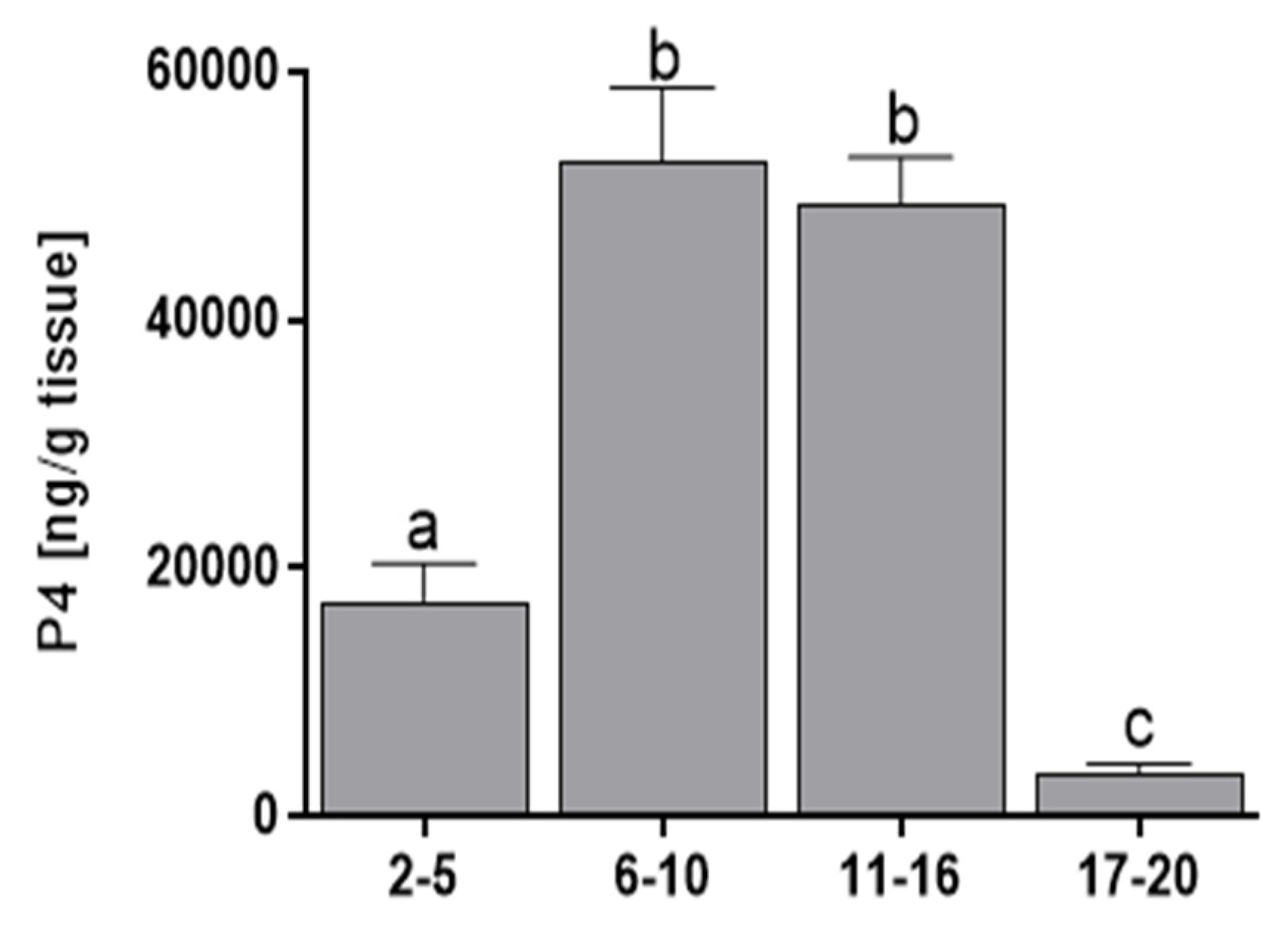 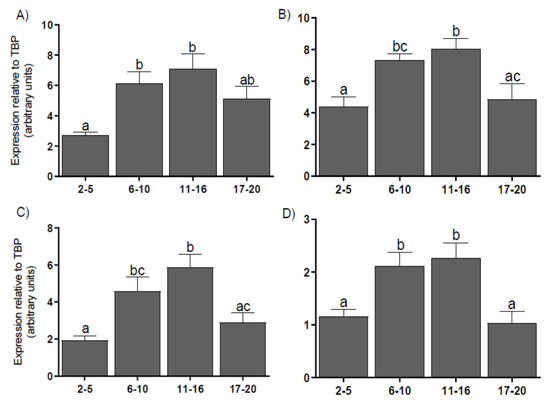