Itaconic acid is an immunoregulatory metabolite produced by macrophages in response to pathogen invasion. It also exhibits antibacterial activity because it is an uncompetitive inhibitor of isocitrate lyase, whose activity is required for the glyoxylate shunt to be operational. Some bacteria, such as Yersinia pestis, encode enzymes that can degrade itaconic acid and therefore eliminate this metabolic inhibitor. Studies, primarily with Salmonella enterica subspecies enterica serovar Typhimurium, have demonstrated the presence of similar genes in this pathogen and the importance of these genes for the persistence of the pathogen in murine hosts. This minireview demonstrates that, based on Blast searches of 1063 complete Salmonella genome sequences, not all Salmonella serovars possess these genes. It is also shown that the growth of Salmonella isolates that do not possess these genes is sensitive to the acid under glucose-limiting conditions. Interestingly, most of the serovars without the three genes, including serovar Typhi, harbor DNA at the corresponding genomic location that encodes two open reading frames that are similar to bacteriocin immunity genes. It is hypothesized that these genes could be important for Salmonella that finds itself in strong competition with other Enterobacteriacea in the intestinal tract—for example, during inflammation. View Full-Text
Keywords: Salmonella; itaconic acid degradation; bacteriocin immunity genes Salmonella; itaconic acid degradation; bacteriocin immunity genes
►▼ Show Figures 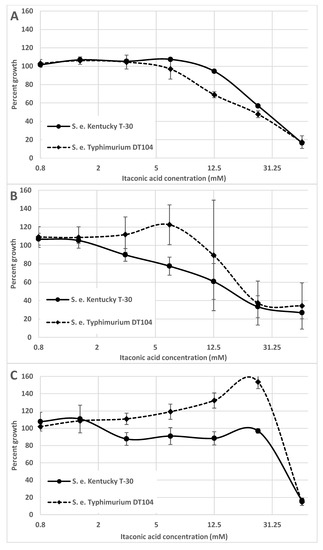