Of Drugs and Trypanosomatids: New Tools and Knowledge to Reduce Bottlenecks in Drug Discovery
Previous Article in Special Issue

Meiotic progression requires precise orchestration, such that one round of DNA replication is followed by two meiotic divisions. The order and timing of meiotic events is controlled through the modulation of the phosphorylation state of proteins. Key components of this phospho-regulatory system include cyclin-dependent kinase (CDK) and its cyclin regulatory subunits. Over the past two decades, studies in budding and fission yeast have greatly informed our understanding of the role of CDK in meiotic regulation. In this review, we provide an overview of how CDK controls meiotic events in both budding and fission yeast. We discuss mechanisms of CDK regulation through post-translational modifications and changes in the levels of cyclins. Finally, we highlight the similarities and differences in CDK regulation between the two yeast species. Since CDK and many meiotic regulators are highly conserved, the findings in budding and fission yeasts have revealed conserved mechanisms of meiotic regulation among eukaryotes. View Full-Text
Keywords: meiosis; Cyclin-Dependent Kinase; CDK; cyclin; APC/C; budding yeast; fission yeast; chromosome segregation meiosis; Cyclin-Dependent Kinase; CDK; cyclin; APC/C; budding yeast; fission yeast; chromosome segregation
►▼ Show Figures 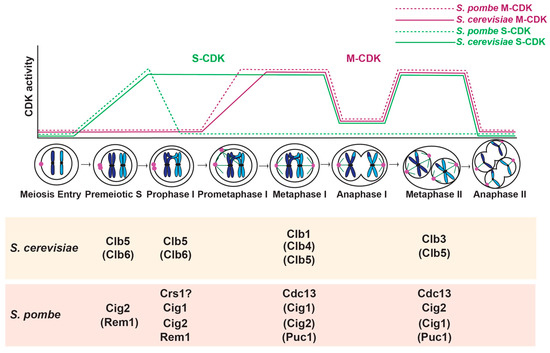