Metabolomics: A Tool to Understand the Impact of Genetic Mutations in Amyotrophic Lateral Sclerosis

Amyotrophic lateral sclerosis is a neurodegenerative disease of the upper and lower motor neurons resulting in death from neuromuscular respiratory failure, typically within two to five years of first symptoms. Several rare disruptive gene variants have been associated with ALS and are responsible for about 15% of all cases. Although our knowledge of the genetic landscape of this disease is improving, it remains limited. Machine learning models trained on the available protein–protein interaction and phenotype-genotype association data can use our current knowledge of the disease genetics for the prediction of novel candidate genes. Here, we describe a knowledge-based machine learning method for this purpose. We trained our model on protein–protein interaction data from IntAct, gene function annotation from Gene Ontology, and known disease-gene associations from DisGeNet. Using several sets of known ALS genes from public databases and a manual review as input, we generated a list of new candidate genes for each input set. We investigated the relevance of the predicted genes in ALS by using the available summary statistics from the largest ALS genome-wide association study and by performing functional and phenotype enrichment analysis. The predicted sets were enriched for genes associated with other neurodegenerative diseases known to overlap with ALS genetically and phenotypically, as well as for biological processes associated with the disease. Moreover, using ALS genes from ClinVar and our manual review as input, the predicted sets were enriched for ALS-associated genes (ClinVar p = 0.038 and manual review p = 0.060) when used for gene prioritisation in a genome-wide association study. View Full-Text
Keywords: gene prioritisation; machine learning; gene discovery; amyotrophic lateral sclerosis; motor neurone disease; knowledge graph gene prioritisation; machine learning; gene discovery; amyotrophic lateral sclerosis; motor neurone disease; knowledge graph
►▼ Show Figures 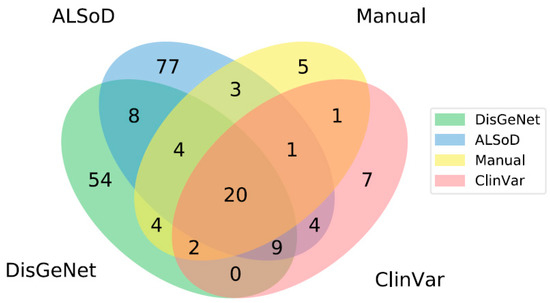