Pitt-Hopkins Syndrome: Clinical and Molecular Findings of a 5-Year-Old Patient

Pitt Hopkins syndrome (PTHS) is a very rare condition and until now, approximately 500 patients were reported worldwide, of which not all are genetically confirmed. Usually, individuals with variants affecting exons 1 to 5 in the TCF4 gene associate mild intellectual disability (ID), between exons 5 to 8, moderate to severe ID and sometimes have some of the characteristics of PTHS, and variants starting from exon 9 to exon 20 associate a typical PTHS phenotype. In this report, we describe the clinical and molecular findings of a Caucasian boy diagnosed with PTHS. PTHS phenotype is described including craniofacial dysmorphism with brachycephaly, biparietal narrowing, wide nasal bridge, thin and linear lateral eyebrows, palpebral edema, full cheeks, short philtrum, wide mouth with prominent and everted lips, prominent Cupid’s bow, downturned corners of the mouth, microdontia and also the clinical management of the patient. The previously and the current diagnosis scores are described in this report and also the challenges and their benefits for an accurate and early diagnosis. View Full-Text
Keywords: Pitt-Hopkins syndrome; TCF4 deletion; neurodevelopment disorder; Face2Gene Pitt-Hopkins syndrome; TCF4 deletion; neurodevelopment disorder; Face2Gene
►▼ Show Figures 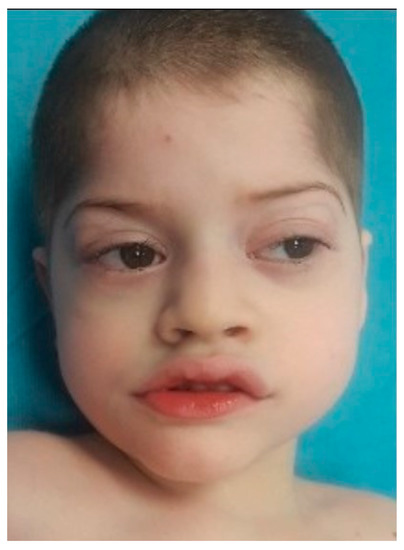