A DSG1 Frameshift Variant in a Rottweiler Dog with Footpad Hyperkeratosis

A single male Rottweiler dog with severe footpad hyperkeratosis starting at an age of eight weeks was investigated. The hyperkeratosis was initially restricted to the footpads. The footpad lesions caused severe discomfort to the dog and had to be trimmed under anesthesia every 8–10 weeks. Histologically, the epidermis showed papillated villous projections of dense keratin in the stratum corneum. Starting at eight months of age, the patient additionally developed signs consistent with atopic dermatitis and recurrent bacterial skin and ear infections. Crusted hyperkeratotic plaques developed at sites of infection. We sequenced the genome of the affected dog and compared the data to 655 control genomes. A search for variants in 32 candidate genes associated with human palmoplantar keratoderma (PPK) revealed a single private protein-changing variant in the affected dog. This was located in the DSG1 gene encoding desmoglein 1. Heterozygous monoallelic DSG1 variants have been reported in human patients with striate palmoplantar keratoderma I (SPPK1), while biallelic DSG1 loss of function variants in humans lead to a more pronounced condition termed severe dermatitis, multiple allergies, and metabolic wasting (SAM) syndrome. The identified canine variant, DSG1:c.2541_2545delGGGCT, leads to a frameshift and truncates about 20% of the coding sequence. The affected dog was homozygous for the mutant allele. The comparative data on desmoglein 1 function in humans suggest that the identified DSG1 variant may have caused the footpad hyperkeratosis and predisposition for allergies and skin infections in the affected dog. View Full-Text
Keywords: Canis lupus familiaris; whole-genome sequence; animal model; genodermatosis; skin; dermatology; keratinocyte; SAM syndrome; precision medicine Canis lupus familiaris; whole-genome sequence; animal model; genodermatosis; skin; dermatology; keratinocyte; SAM syndrome; precision medicine
►▼ Show Figures 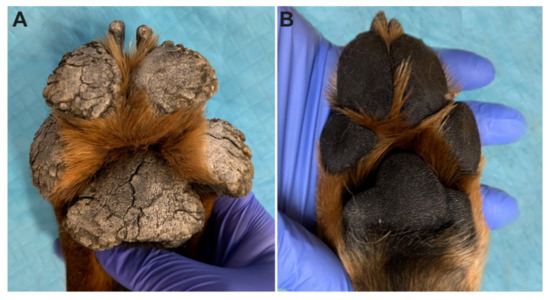