Identification of ADPKD-Related Genes and Pathways in Cells Overexpressing PKD2

Consistent with the gene dosage effect hypothesis, renal cysts can arise in transgenic murine models overexpressing either PKD1 or PKD2, which are causal genes for autosomal dominant polycystic kidney disease (ADPKD). To determine whether PKD gene overexpression is a universal mechanism driving cystogenesis or is merely restricted to rodents, other animal models are required. Previously, we failed to observe any renal cysts in a transgenic porcine model of PKD2 overexpression partially due to epigenetic silencing of the transgene. Thus, to explore the feasibility of porcine models and identify potential genes/pathways affected in ADPKD, LLC-PK1 cells with high PKD2 expression were generated. mRNA sequencing (RNA-seq) was performed, and MYC, IER3, and ADM were found to be upregulated genes common to the different PKD2 overexpression cell models. MYC is a well-characterized factor contributing to cystogenesis, and ADM is a biomarker for chronic kidney disease. Thus, these genes might be indicators of disease progression. Additionally, some ADPKD-associated pathways, e.g., the mitogen-activated protein kinase (MAPK) pathway, were enriched in the cells. Moreover, gene ontology (GO) analysis demonstrated that proliferation, apoptosis, and cell cycle regulation, which are hallmarks of ADPKD, were altered. Therefore, our experiment identified some biomarkers or indicators of ADPKD, indicating that high PKD2 expression would likely drive cystogenesis in future porcine models. View Full-Text
Keywords: ADPKD; RNA-seq; PKD2 ADPKD; RNA-seq; PKD2
►▼ Show Figures 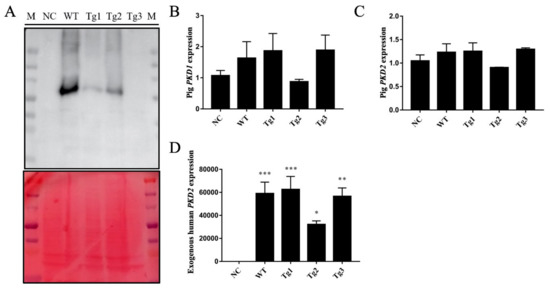