Ceriporiopsis subvermispora is a white-rot fungus with a high specificity towards lignin mineralization when colonizing dead wood or lignocellulosic compounds. Its lignocellulose degrading system is formed by cellulose hydrolytic enzymes, manganese peroxidases, and laccases that catalyze the efficient depolymerization and mineralization of lignocellulose. To determine if this metabolic specialization has modified codon usage of the lignocellulolytic system, improving its adaptation to the fungal translational machine, we analyzed the adaptation to host codon usage (CAI), tRNA pool (tAI, and AAtAI), codon pair bias (CPB), and the number of effective codons (Nc). These indexes were correlated with gene expression of C. subvermispora, in the presence of glucose and Aspen wood. General gene expression was not correlated with the index values. However, in media containing Aspen wood, the induction of expression of lignocellulose-degrading genes, showed significantly (p < 0.001) higher values of CAI, AAtAI, CPB, tAI, and lower values of Nc than non-induced genes. Cellulose-binding proteins and manganese peroxidases presented the highest adaptation values. We also identified an expansion of genes encoding glycine and glutamic acid tRNAs. Our results suggest that the metabolic specialization to use wood as the sole carbon source has introduced a bias in the codon usage of genes involved in lignocellulose degradation. This bias reduces codon diversity and increases codon usage adaptation to the tRNA pool available in C. subvermispora. To our knowledge, this is the first study showing that codon usage is modified to improve the translation efficiency of a group of genes involved in a particular metabolic process. View Full-Text
Keywords: Codon bias; Ceriporiopsis subvermispora; lignocellulose degrading system Codon bias; Ceriporiopsis subvermispora; lignocellulose degrading system
►▼ Show Figures 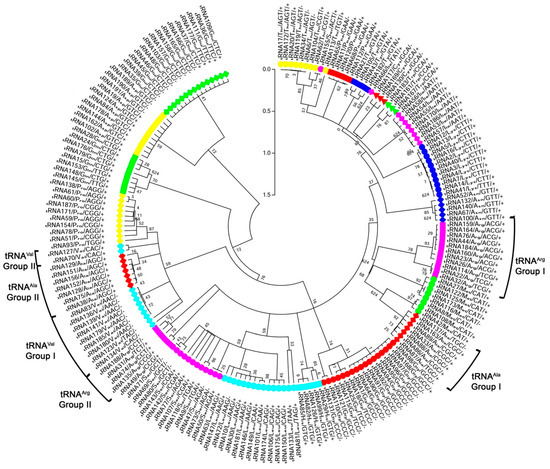