Plasmid Transfer by Conjugation in Gram-Negative Bacteria: From the Cellular to the Community Level
Previous Article in Journal

ShadowCaster: Compositional Methods under the Shadow of Phylogenetic Models to Detect Horizontal Gene Transfers in Prokaryotes

Multidrug resistance (MDR) often results from the acquisition of mobile genetic elements (MGEs) that encode MDR gene(s), such as conjugative plasmids. The spread of MDR plasmids is founded on their ability of horizontal transference, as well as their faithful inheritance in progeny cells. Here, we investigated the genetic factors involved in the prevalence of the IncI conjugative plasmid pESBL, which was isolated from the Escherichia coli O104:H4 outbreak strain in Germany in 2011. Using transposon-insertion sequencing, we identified the pESBL partitioning locus (par). Genetic, biochemical and microscopic approaches allowed pESBL to be characterized as a new member of the Type Ib partitioning system. Inactivation of par caused mis-segregation of pESBL followed by post-segregational killing (PSK), resulting in a great fitness disadvantage but apparent plasmid stability in the population of viable cells. We constructed a variety of pESBL derivatives with different combinations of mutations in par, conjugational transfer (oriT) and pnd toxin-antitoxin (TA) genes. Only the triple mutant exhibited plasmid-free cells in viable cell populations. Time-lapse tracking of plasmid dynamics in microfluidics indicated that inactivation of pnd improved the survival of plasmid-free cells and allowed oriT-dependent re-acquisition of the plasmid. Altogether, the three factors—active partitioning, toxin-antitoxin and conjugational transfer—are all involved in the prevalence of pESBL in the E. coli population. View Full-Text
Keywords: horizontal gene transfer; conjugation; plasmid segregation; post-segregational killing (PSK); toxin-antitoxin (TA); Tnseq; Tn-seq; parABS horizontal gene transfer; conjugation; plasmid segregation; post-segregational killing (PSK); toxin-antitoxin (TA); Tnseq; Tn-seq; parABS
►▼ Show Figures 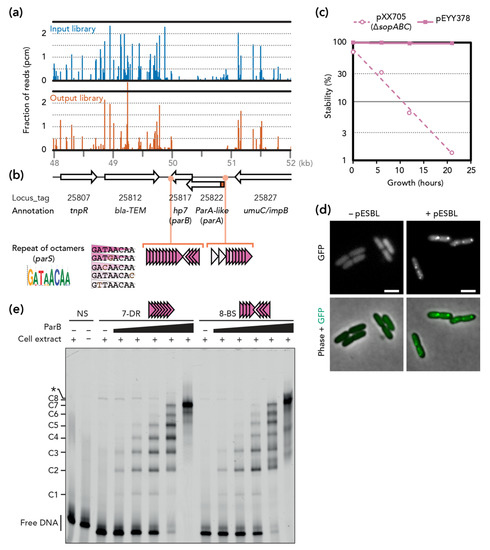