Among marine phytoplankton, Mamiellales encompass several species from the genera Micromonas, Ostreococcus and Bathycoccus, which are important contributors to primary production. Previous studies based on single gene markers described their wide geographical distribution but led to discussion because of the uneven taxonomic resolution of the method. Here, we leverage genome sequences for six Mamiellales species, two from each genus Micromonas, Ostreococcus and Bathycoccus, to investigate their distribution across 133 stations sampled during the Tara Oceans expedition. Our study confirms the cosmopolitan distribution of Mamiellales and further suggests non-random distribution of species, with two triplets of co-occurring genomes associated with different temperatures: Ostreococcus lucimarinus, Bathycoccus prasinos and Micromonas pusilla were found in colder waters, whereas Ostreococcus spp. RCC809, Bathycoccus spp. TOSAG39-1 and Micromonas commoda were more abundant in warmer conditions. We also report the distribution of the two candidate mating-types of Ostreococcus for which the frequency of sexual reproduction was previously assumed to be very low. Indeed, both mating types were systematically detected together in agreement with either frequent sexual reproduction or the high prevalence of a diploid stage. Altogether, these analyses provide novel insights into Mamiellales’ biogeography and raise novel testable hypotheses about their life cycle and ecology. View Full-Text
Keywords: Mamiellales; biogeography; Tara Oceans; sexual reproduction; mating-type; ecogenomics Mamiellales; biogeography; Tara Oceans; sexual reproduction; mating-type; ecogenomics
►▼ Show Figures 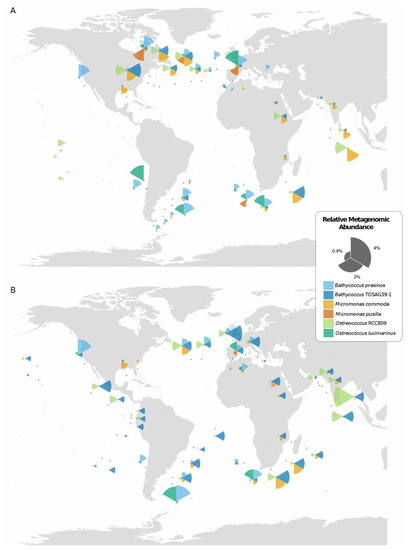